A Nigerian man identified as Okikiola has taken to micro-blogging site, Twitter, to share a touching story of a woman he met selling oranges under the rain in Lagos.

According to Okikiola, an entrepreneur and counselor, he was driving through Oshodi Isale to FRS when he saw the woman standing under the rain with a bag of oranges just by her side.

He said that although she initially looked like a mentally unstable to him, however, out of pity, he was forced to stop and check on the woman after seeing her in that pitiable condition.

The man narrated how he interacted with her and she opened up on how she was a fashion designer but after things got tough she resorted to selling orange.

He also noted that the situation further moved him to tears after getting to know that all her oranges only cost N1,200.

Okikiola tweeted; “So i was driving to FRS office yesterday morning along oshodi isale, close to lastma office, and i saw a woman under the rain shivering Cold face, at first sight i thought she wasn’t ok psychologically and i drove past her, at a second glance via the side mirror!!!”

“I noticed there was a sack close to her, i slowed down and i kept wondering why was she was under the rain, so i parked, and trekked back to her, i saw it was a sack full of oranges, and she had sold only one, the #50 naira was right on top of the oranges

Solutions to the Problem (Power Law)

“I moved close and asked her, “madam are you selling this? “ She said yes, i asked how much is the whole sack? She said #1200 naira, i was lost for words Disappointed face i said to myself “1200?” I had no cash on me so i promised i was going to come back to her

“I went back to my car, and i couldn’t just hold back the tears, it kept rolling down my cheeks, as i looked up to thank GOD for all the blessings i over looked and forgot to appreciate, for all the goodness and mercies i get despite my sporadic sins

“I was in no way better than this woman, afterall she’s outspoken, all through my conversations with her, she never replied with broken English, however, i went back to her and gave her my token, i was more concerned with her leaving the rain as she was really shivering,” 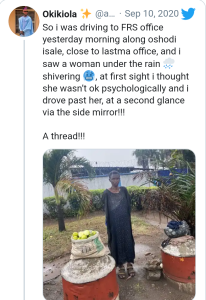 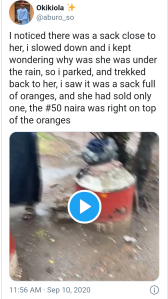