Controversial Nigerian journalist, Kemi Olunloyo, has taken to Twitter to disclose that Chioma Avril Rowland is pregnant with her second child for Davido. 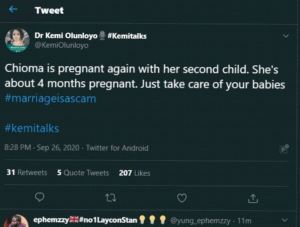 Arithmetic Progression: Solution to the problem 1

That is that… Meanwhile in another news, Nollywood actor Wole Ojo has praised Ozo for ignoring Nengi during their reunion Saturday’s All White Party last night.

Sexually Transmitted Infections May be Why You Are not Pregnant

Yesterday, all evicted Big Brother Naija housemates were invited for a reunion Saturday night party with the finalists ahead of today’s grand finale.

During the party, Ozo totally ignored Nengi as he rolled with Ka3na. Nengi couldn’t hold back her emotions as she cried profusely.

Reacting to Ozo’s action, Wole Ojo said Ozo did the right thing claiming his mother have talked sense into his head therefore his eyes are clear now.

‘Hey Idiot. Yes you. The 1 that called us (some men) cowards/cowardly for not loving like your “love ambassador. Wawuuu! At last he’s awakened and now a coward like us too. For rejecting rubbish!