Falz, Runtown and Naira Marley are among celebrities that have called for protest over the alleged killings and brutality of citizens by operatives of the Special Anti-Robbery Squad (SARS).

On Saturday, videos had surfaced on Twitter showing a witness who claimed a young man, who was commuting in the Ugheli town of Delta state, was gunned down by SARS officials.

This had provoked public outcry against the police department, with the ‘EndSARS’ hashtag taking centre stage on social media platforms.

Joining the fray of celebrities, Falz, a singer known for his socially conscious music, tackled President Muhammadu Buhari while expressing his disappointment that he was yet to address the violence being meted out to citizens.

This Week on Sum of AP( Arithmetic Progression)

“Makes me sick to my stomach, that till now, we are still waiting for a single word from our so-called president on this SARS menace. Ready to enter the streets,” the musician wrote.

“By far the MOST insensitive government ever in our history. Unbelievable. Just always so absent.

“Been ready since. We have to move in numbers. They cannot kill everybody. Why we dey fear to protest? They may kill us? Are they not killing us already?? I’m every way possible!!!”

On his part, Runtown said he is volunteering to lead a protest against police brutality and harassment at the Lekki toll gate on October 8.

“This has gone long enough and now we MUST take action! I’ll be leading a protest to #ENDSARS on Thursday, October 8th 2020. They MUST listen to us, they MUST make/effect REAL and VISIBLE changes! Empty promises won’t work this time!!!,” Runtown wrote.

Naira Marley also took to the microblogging platform to say that he can lead the protest against operatives of SARS but is convinced he might be sent to Kirikiri prison.

Naira Marley: I Can Lead SARS Protest but know I’ll be Sent to Kirikiri Prison

Toke Makinwa, a media personality, called on both the president and Babajide Sanwo-Olu, Lagos governor, to not just reform but scrap the police unit.

“The youth of this country are tired. Like we don’t already have enough to worry about, you add police brutality. When we cry out it falls on deaf ears, why can’t the government hear us,” she said.

“The same youth who add so much to our economy; who look beyond the government for a better life. The same youths that have decided to stay hopeful regardless of how our leaders abuse us.

“You can’t keep quiet while our young ones suffer in the hands of those who are meant to protect them, @mbuhari @jidesanwoolu. We don’t want a reformed #Sars.

“We are not asking you to appeal to #Sars, end it. We don’t want illegal checkpoint or forcefully bullying our brothers, they have families who live in fear daily, #EndSarsBrutality #EndSars

“People outside look at you and think it’s so cool to be Nigerian. Yet your heart aches each time ’cause you know the real meaning of being Nigerian. No change, just empty promises…”

Olamide, CEO of YBNL records, also lamented that the use of the ‘EndSARS’ hashtag has become tiring.

“Police brutality is skyrocketing by the day And the Nigerian government is neither deaf nor blind, they see all the trends and tag along with whichever one they like,” he wrote.

“You don’t have to like this one to do the right thing. Hashtags are becoming tiring. The people are sick of it. The greatest patriotism is to tell your country when it is behaving foolishly, viciously.

“This is not the time to point fingers, who the fuck is protesting, and who is not. It’s time to collectively stop fighting each other and demand good governance.

“Nobody deserves to killed for nothing by the people that are meant to protect them. Don’t ignore people when they need you and come back talking about the people being the problem of Nigeria.”

In the wake of the public outcry, Mohammed Adamu, inspector-general of police (IGP), on Sunday banned SARS operatives from undertaking routine patrols as well as stop and search duties.

Meanwhile, here are what other celebrities had to say on Twitter: 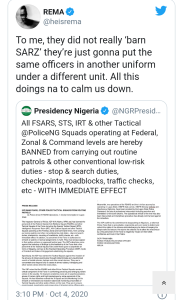