Recall that the BBNaija power couple, broke fans heart when they opened up on how their model love story came to an abrupt end two months ago, following Mercy’s alleged marriage to mystery man.

Speaking after the break up and shade they threw at each other online, Ike has revealed that God miraculously freed him from the relationship and he’s thankful for it.

A fan said the public squabbles between Ike and Mercy was for attention ahead of the season 2 premiere of their reality TV show.

Then he replied that attention will come for people so long as they keep praying.

When another fan prayed for God to open doors for the reality TV star, his response was;

“He has freed me, I’m thankful already”. 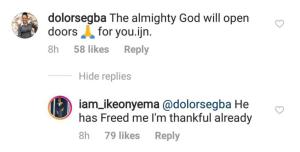