A “ghostly” figure has terrified a pair of urban explorers who took photos inside an abandoned mental health hospital.

Jamie Osborne and Michael Cosgrove, both 20, went to Rosslynlee Hospital, an abandoned hospital near Roslin in Midlothian, Scotland, to explore.

Rooms inside the eerie derelict mental health facility had remained untouched for over a decade when it closed its doors.

But the pair chose to visit the hospital and take pictures.

They had been taking it in turns to pose in a wheelchair that had been left in one of the hospital’s rooms when they checked one image which appeared to capture a woman wearing a white gown “reaching over” Michael. 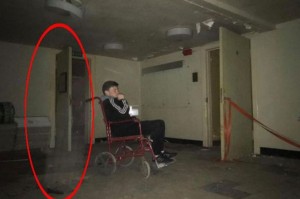 Jamie, from Edinburgh, described how the “air turned cold” when they entered the spooky facility and that they could see their breath, despite it being the middle of summer.

He told the Daily Record : “We were in different rooms like the nursery and the nurses’ rooms.

“We then found a way into the actual building where it got a lot colder where we could see our breath even though it was the middle of summer.

“We looked around where we found old sweet wrappers and old cassette tapes.

“We then positioned the wheelchair and took a couple photos and when we looked back through them we saw what looked like someone pushing the chair.

“After further examination it now looks like something much taller reaching over the chair and looking towards the camera.”

“Once we saw this we quickly left and didn’t go back”.

Rosslynlee Hospital was built in 1874 and used to house a closed community of up to 500 patients before it closed its doors in 2010.