Nathan Ranklin from Peckham in London, was told by doctors aged 14 that if he carried on the way he was going then he wouldn’t make his 30th birthday. 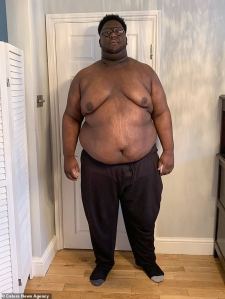 Nathan Ranklin when he was fat

An Obese man, Nathan Ranklin, a 30-year-old has stunned people after managing to drastically redce his weight.

The man is now unrecognisable after dropping nearly 19 stone, after getting fed up with always being the ‘fat friend’.

Super slimmer, Nathan Ranklin, 30, from Peckham in London, was told by doctors aged 14 that if he carried on the way he was going then he wouldn’t make his 30th birthday.

But Nathan realised he needed to do something about his weight after he tipped the scales at 36st 9lbs.

Nathan had previously taken out credit cards before going on holidays due to being scared he would have to pay for an extra seat.

But now after losing 18st 13lbs, thanks to The 1:1 Diet by Cambridge Weight Plan, Nathan looks unrecognisable at 17st 10lb.

The man after losing his weight

Nathan said: ‘I couldn’t do all of the things my friends were doing. I couldn’t go to theme parks because I wouldn’t fit in the seats, I couldn’t do go-karting or quad biking because I was too big for the cars and bikes.

‘I just use to lie to my friends and said I didn’t like doing those things, but the truth was I couldn’t go because I was so fat.

‘I also broke the seats in my car because I was so big and of course I always needed the seat belt extensions on planes.

‘I even took out a credit card just in case I needed to buy two seats.’

Nathan recalls that he would indulge in take away chicken and chips at least six times a week, where he would eat a ten-piece family bucket and six white chocolate cookies to himself.

He added: ‘I also was a really heavy drinker, especially after I lost my dad to cancer in 2014, my drinking began to spiral out of control.

‘I went out at least four times a week and I would polish off two bottles of vodka before leaving the house, and throughout the week I would have a few glasses of spiced rum and Coke.

‘Thankfully I was approached by my consultant, Debbie, from The 1:1 Diet by Cambridge Weight Plan, who asked if I needed her help. Which I really did need.

‘I remember Debbie weighed me, and I thought was about 28st, but when I saw 36st 9lbs come up on the scales my heart left me. I could not believe it.

‘That is the moment that I realised that I really was on my way to killing myself.

‘So I started the plan and started trying to exercise by walking. Because I was so big even just a short walk was hard.

‘After a few weeks the weight started to fall off me and I got a new lease of life.’

After losing weight, Nathan needed to go out and buy some new clothes, and says that he was thrilled when he could walk into Tesco or Primark knowing the clothes would now fit him.

He added: ‘When I was at my biggest I couldn’t walk into normal shops and buy my clothes because they didn’t have big enough sizes. You wouldn’t believe how excited I was when I walked into Primark and seen tops for about £5. The t-shirts that I had to buy were at least £25.’

After losing 12st Nathan decided he was ready to go on holiday again. He recalls having extreme anxiety before the flight, wondering if he would still need a seat belt extension.

Nathan says that when he sat down and could do the seat belt up he was screaming and dancing with joy, and finally felt like he was getting his life back.

Nathan has continued to lose more weight and is feeling better than he has ever felt, now weighing 17st 10lbs. He now describes himself as a fitness freak as he is excited to wake up every morning for a 5k run or to get out on his bike for a 35-mile cycle. 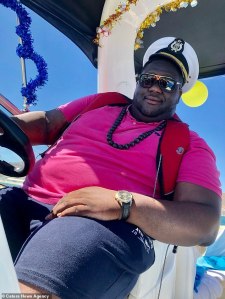 Nathan said: ‘I have completely turned my life around. Being slim is completely alien to me, I feel like a kid at Christmas, I am just so excited about everything now.

‘I have gone from “biggie” to “slender” and I have won Cambridge’s male slimmer of the year award. It’s mad.

‘My whole life was built around living up to this “biggie” persona and making terrible unhealthy choices, but now I have regained my identity and live my life, without having to say “I can’t’ to everything”.’