A South-Sudanese lady has left many in a state of utter amazement following her decision to get married to herself.

The Australian based African model named Ayuol Manyok took o social media to share a photo of herself in a wedding gown inside a church.

She claimed to be sick of men, hence her reason for choosing to make her wedding vows to herself.

Ayuol captioned the photo; “Sick of these nvggxxs, so I made my own vows to myself”

Sick of these niggas, so I made my own vows to myself 👰🏿‍♀️ pic.twitter.com/xvBufz4Ozd

Checkout some reactions below: 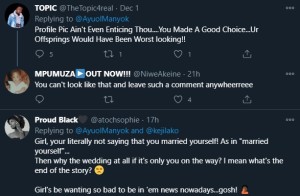 Then why the wedding at all if it’s only you on the way? I mean what’s the end of the story?

Girl’s be wanting so bad to be in ’em news nowadays…gosh!

@GNyarong; It will still end in tears.

@AmyNeilson12; Wow! beautiful & smart & inspiring. And I hadn’t heard of Bell Hooks (to my shame!) so I have now taken your advice & ordered the book

@MalekAkotdit; You get only one and be comfortable not all. Congrats to yourself anyway.