A student of the institution took to Twitter to share a photo of a banner supposedly by the school administration, banning cars owned by students from entering campus.

According to the banner, the prohibition of students from entering the institution of learning with their cars is for security reasons. 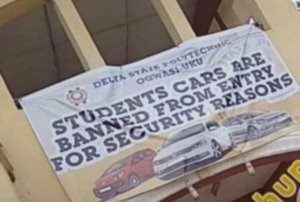