By Henry Iheanacho
Nollywood actress, Regina Daniels, has left her fans feeling worried after sharing new photos of herself on social media.

In the pictures posted by the mother-of-one who rocked a casual black outfit in she could be seen to have shed a lot of weight and looks slimmer.

She, however, insinuated that she doesn’t care about what anyone thinks or say about her new look.

Delta Poly Allegedly Bans Students from Driving Cars on Campus
Regina captioned her images with the saying that the version of her that a person creates in their mind is not her responsibility.

Vacancy for Authors and Aggregators on ginnyent.net
Nevertheless, fans were concerned over her new look which some say is not appealing like her old self. 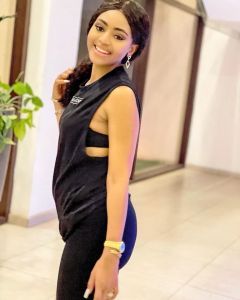 See some of the reactions below…
lady_pricsy; We want the chubby Regina back.
nancyofficiall; Regina dear, there’s money yes! But u are going down day after day, I know you don’t like it, pls allow yourself breathe, if it’s weight loss process, stop already n if it’s another thing stop too…. you are a shadow of yourself pls, this is not how we know you to be, add flesh biko.
lisaa_ndukwe; Slide 5. what is this… stop this Mapia tea now.
abb.ex said; Abeg say una no notice say dis babe no fine like b4 again…nw see as ur yash don flat like pako nd ur face b like cloth way den no iron….pls wat is really happening to u…..
At least voice out person fy save u 4 here……I no kuku say anything