Crystal palace and Ivory Coast footballer, Wilfried Zaha has vowed to stop taking the knee before matches and urged fellow black footballers to do the same because he believes the gesture has lost its meaning and may even be making blacks a ‘target’ for racial abuse.

Face Of 15-Year-Old Niger Student Who Wrote Fake Threat Letter Of Impending Kidnapping To His School
The former Manchester United player, 28, believes taking the knee to show support for racial equality is becoming ‘something we just do now’.
Brentford players have stopped making the gesture as they ‘no longer feel that it is making an impact’.

Zaha speaking at Thursday’s Financial Times’ Business of Football summit, said: ‘I’ve said before that I feel like taking the knee is degrading and stuff because growing up my parents just let me know that I should be proud to be black no matter what and I feel like we should just stand tall.

‘Trying to get the meaning behind it, it’s becoming something that we just do now and that’s not enough for me.
‘I’m not going to take the knee, I’m not going to wear Black Lives Matter on the back of my shirt because it feels like it’s a target. We’re trying to say that we’re equal but we’re isolating ourselves with these things that aren’t even working anyway, so that’s my stand on it.

‘I feel like we should stand tall. Now I don’t really tend to speak on racism and stuff like that because I’m not here just to tick boxes. Unless action is going to happen, don’t speak to me about it.’ 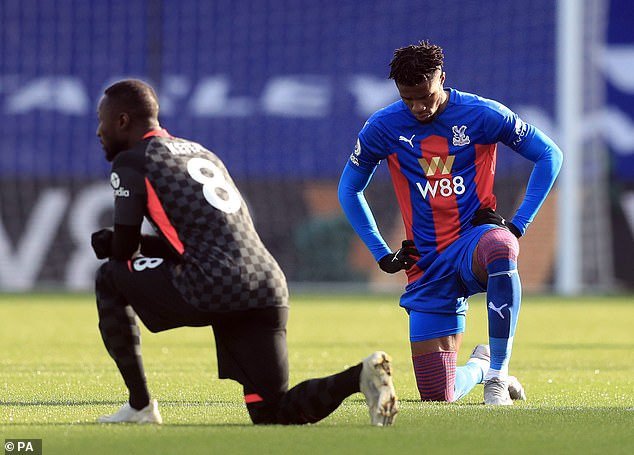 Zaha, has also been targeted with abuse on several occasions on social media in the past.
Speaking on the On the Judy podcast, Zaha said: ‘The whole kneeling down – why must I kneel down for you to show that we matter?

Dogs Prevent Armed Policemen from Entering a Compound in Lagos (Video)
‘Why must I even wear Black Lives Matter on the back of my top to show you that we matter? This is all degrading stuff.
‘When people constantly want to get me to do Black Lives Matter talks and racial talks and I’m like, I’m not doing it just so you can put “Zaha spoke for us”. Like a tick box, basically.
‘I’m not doing any more, because unless things change. I’m not coming to chat to you just for the sake of it, like all the interviews I’ve done.
‘All these platforms – you see what’s happening, you see people making fake accounts to abuse black people constantly, but you don’t change it.
‘So don’t tell me to come and chat about stuff that’s not going to change. Change it. All that stuff that you lot are doing, all these charades mean nothing.’