A Nigerian man was left traumatized after he shared this lovely photo of himself and his dad.
The Nigerian man with the Twitter handle @LaoluCarsell, shared the photo above with the caption 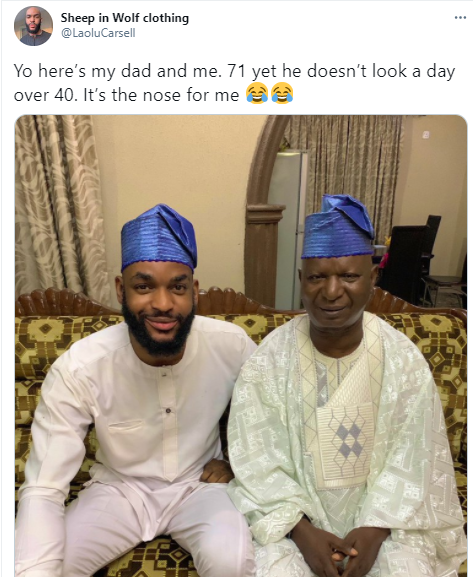 The photo caught the attention of some negative-minded Nigerians who asked him to tell his father to go and conduct a DNA test as they do not see any resemblance between father and son.

Laolu who was utterly disgusted by their comments took to his Twitter handle this morning to react.

”I really don’t even know what to say. I was bullied today and I hated it. I posted a pic of my dad and I and everyone just felt they had a right to an opinion. Some were telling me to go do a dna test. Like is there any wisdom to that? I really hope he doesn’t see those tweets.

He has been a father to 5 children without a wife for the last 8 years and he has been our backbone. He is the best person I know and to watch him being disrespected and insulted is one of the most heartbreaking things to ever happen to me.

I’m his only son and last born and my biggest achievement yet is to be the son to such a great man. Y’all can go to hell.”
Some Twitter users left kind words for him, asking him to ignore the trolls.