A woman has taken to Twitter to reveal how she got infected with HIV by her boyfriend of 5 years.

A woman has shared the touching story how she contracted HIV from her boyfriend of 5 years.

Why I Don’t Have a Female Friend

The woman said the pair dated for five years before the shocking discovery.

The woman revealed that she met the man in 2010 and they began dating. He was the first guy she ever had sex with and she trusted him and believed he was just as faithful as she was.

However, she said that after years of dating, she found out he has 3 kids with 3 different women.

In 2016, she said she became sick but hospitals couldn’t identify the problem. Her aunt later advised her to meet a dermatologist and some tests were done.

One of the tests showed she has tuberculosis. She was asked to do an HIV test and it also came back positive.

She explained that when she confronted her boyfriend, he insulted her and called her promiscuous.

He later apologized for his actions after he fell sick and was admitted to the hospital. The woman said her life has been changed by her ex-boyfriend’s actions because every man now treats her like ”poison.” 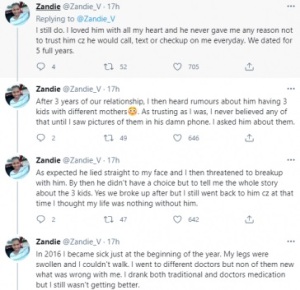