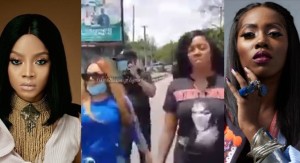 Protesters on Saturday stormed major cities across the nation to protest against insecurity, bad governance, abuse of fundamental rights amongst other concerns.

States like Lagos, Oyo, Ogun, Calabar, Edo and the Federal Capital Territory have seen a reasonable turnout of young men and women protesting over the challenges in the country.

Tiwa Savage and Toke Makinwa decided to join the protests in Lagos, which is said to have kicked off at the Gani Fawehinmi Park, Lagos, for the June 12 Democracy Day protest.