The celebrity barman as he likes to be called took to his Insta-stories on July 14, and shared videos of the gift presentation.

According to Chief Priest, the 46 cows represents his former boss’s age.

Obi Iyiegbu aka Obi Cubana is set to bury his late mother, Ezinne Uche Iyiiegbu. The burial will be taking place at Afor Uzo Oba in Anambra state later this week.

According to Nigerian Disc Jockey, DJ BigN, Obi Cubana has so far received 246 cows from friends and associates as gifts for his mother’s burial.

Cubana Chief Priest and Obi Cubana used to be business associates until they fell out about a year ago. 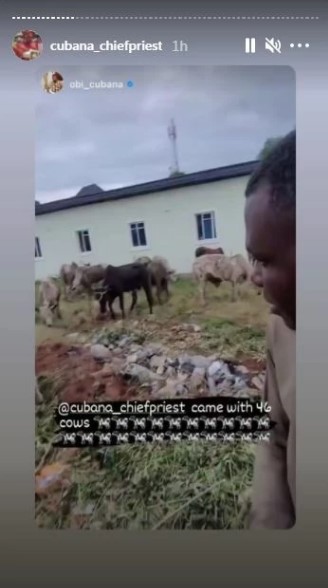 The popular celebrity barman went on a social media rant after their relationship fell apart but Obi Cubana has remained silent about their rift to date.