A Nigerian lawyer practicing in New York has hit out at critics after she was told to crop out her chest in her professional head shot because her full bust makes it unprofessional.

The lawyer was fully covered in the photo, with her decent shirt buttoned up almost to her neck.

Yet, a follower left her a message, telling her that she and her husband found the photo to be unprofessional because she’s busty.

The follower went ahead to crop the photo for her, cutting out her bust area. 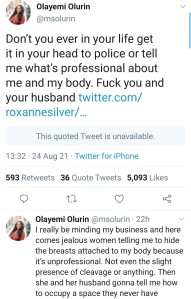 The lawyer named Olayemi Olurin responded, blasting the woman and every other person who tries to police her body and hypersexualize her for being endowed. 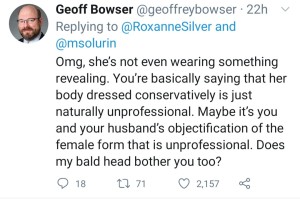