Gerard Pique reportedly pleaded with Barcelona not to renew Lionel Messi’s contract last summer in order to save the club’s finances.

Before Messi’s move to PSG, Messi was told by the Catalans president Joan Laporta that they could not afford to keep him, despite the Argentine offering to slash his wages by 50 percent, which was worth in excess of £425million over four years.

The 34-year-old then completed a move to Paris Saint-Germain on a free transfer, signing a two-year contract at the Ligue 1 giants worth £35m a season.

According to Spanish newspaper El Pais, Barcelona defender Pique betrayed his lifelong friend Messi by urging the club to let the forward go for the sake of the club.

Pique and Messi came through the same youth team in Barcelona’s La Masia academy and then spent 14 years as team-mates in the Catalans’ senior squad.

But it is not the first time that reports have emerged of a fracture between Messi and Pique since the Argentine completed his move to Paris.

Last month, reports in Spain claimed that Messi felt deceived by Pique after the defender cut his Barcelona wage package down until after the forward had left.

Messi’s other close friends at Barcelona, Jordi Alba and Sergio Busquets. both took salary cuts in a bid to free up room for Messi to stay – but Pique did not confirm his slashed salary until it was too late.

Journalist Lluis Canut told Onze on TV3: ‘The last contract renewal signed by Pique did a lot of damage to Messi and he felt disappointed.

‘In part, he also felt deceived by Pique, because [he then didn’t further reduce his contract] until Messi left the club and Messi felt he should have done that earlier to try and avoid his exit.’

Onda Cero reporter Alfredo Martinez, meanwhile, says their relationship is ‘broken’. Just a month ago, Pique revealed it was difficult to see Messi depart his boyhood side, and hailed him as the ‘best in history’. 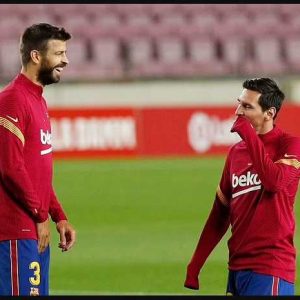 ‘I have shared a dressing room since I was 13 years old, he is almost like a brother, and it was very hard on a sporting and personal level,’ he told El Homiguero. ‘This year things have not started well in part because the best in history has left us.’

Messi was joined by both Busquets and Alba at a high-end Japanese restaurant on January 24, although Pique, his old friend, was not present.