American rapper, Kodak Black, was among three people shot early Saturday February 12, as he was leaving a party held for Justin Bieber in West Hollywood, California.

The 24-year-old Florida rapper and three others were shot; two were taken by ambulance and two self-transported to a hospital, the Los Angeles Police Department said. All are in stable condition.

Couples Who keep Their Weddings Cheap Are less Likely to End up Divorcing, New Study Finds

According to reports by TMZ, Kodak – real name Bill Kapri – was outside the restaurant with fellow rappers Gunna and Lil Baby in the early hours of Saturday (12 February) morning.

A fight broke out within the group, with Black reportedly attempting to punch someone when gunshots were heard by witnesses. He was shot in the leg.

“The fight was believed to have started with someone in Kodak Black’s entourage,” a source told Page Six. “After others jumped in, shots were fired… and then all hell broke loose.”

It was not immediately clear what sparked the fight outside the club in the 400 block of N. La Cienega Boulevard. But an LAPD spokesman said the victims were shot when they emerged from the club during the fight.

In a video shared online, several people were seen fighting with Black during the scuffle. After a few moments, multiple gunshots were heard. 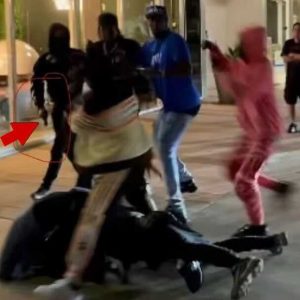 The investigation into the shooting is ongoing.

Police said that 10 shots were fired during the altercations, with four men injured, including Black.

One is said to have been shot in the shoulder, one the leg, and one the buttocks, a source said, while photos showed a man covered in blood.

Two of the men (a 19 and 60-year-old) were taken straight to the hospital from the scene. A 24-year-old (believed to be Black) and another man took themselves to the hospital later.

Two of the men are yet to be named by local authorities, but they are all said to be in stable condition.