Salemgists sighted a video of a Nigerian Army Special Forces personnel weeping and begging for forgiveness after he was caught collecting bribe.

Anonymous Hacks Russian Media Censorship Agency and Leaks 340,000 Files amid Claims Moscow Could try to cut the Country off from the Internet

The yet-to-be named officer was caught while soliciting bribe from motorists. He was spotted in the video begging for forgiveness as his superior ordered him to surrender the bribe collected. 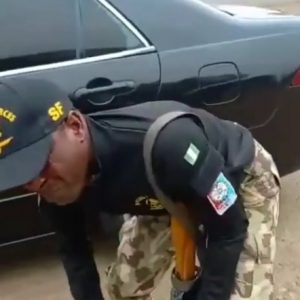 The officer who stated that he has been in the Army for 31 years begged to the extent that he went on his knees.