A Nigerian family have declared their commitment to being happy irrespective of their financial status or standing in the society.

The joyful family living in a shack, decided to join the Professional Beat TikTok Challenge and it melted the hearts of social media users. 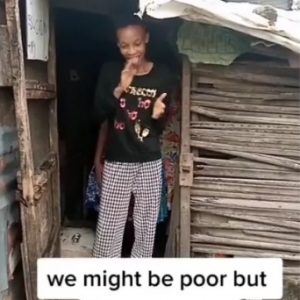 In a video which has gone viral, the family of four which includes three kids and their father, entertained people by dancing to the mixed song which is being used on TikTok.

The most touching part of their post was the caption that accompanied it, which read; ‘‘We might be poor but we are happy.”

saintavenue_ent1 wrote; 💃🔥🕺🏾Y’all Are Rich In Good Health 💯 Poverty is a state of mind. You’re richer than most people with money.

officialnairaosha; I love them ❤️

primzlegend16; Love them all ❤️