A Brooklyn Bishop named Lamour Whitehead was robbed at gunpoint in the middle of a sermon on Sunday, July 24, and it was all caught on video.

The service was being livestreamed when, suddenly, the Bishop raised his hands in surrender and lay on the ground as members are heard screaming.

The church’s livestream shows the gun being held on the pastor. The Bishop later gave an update.

He said he was five to 10 minutes into preaching Sunday morning on Ramsen Avenue in Canarsie, Brooklyn, when he saw the door in the back of the room kick open and three to four men walked in with guns.

Whitehead, of Leaders of Tomorrow International Ministries, said: “I said, ‘Alright, alright, alright,’ pretty much stating that I’m not going to do anything because I know you’re coming for me. You’re coming straight to me. I don’t want my parishioners hurt. I’ve got women and children there.

“As I got down, one went to my wife and took all her jewelry and had the gun in front of my 8-month-old baby’s face. Took off my bishop’s ring, my wedding band and took off my bishop’s chain, and then I had chains underneath my robe and he started tapping my neck to see if anything else. So that means they knew. They watched and they knew that I have other jewelry.”

“They had guns on my deacons that was at the door,” Whitehead added.

He also said that what viewers don’t see on camera are around 100 congregants who were in the room. Men, women and children dropped to the floor in silence.

According to police, the men took off in a white Mercedes.

Whitehead said cops have a license plate and witnesses saw the men change clothes outside.

“These men, they need to turn themselves in,” Whitehead said. “I forgive you and I’m praying for you, and I hope that God deliver you from the mindset of who you are at this time.” 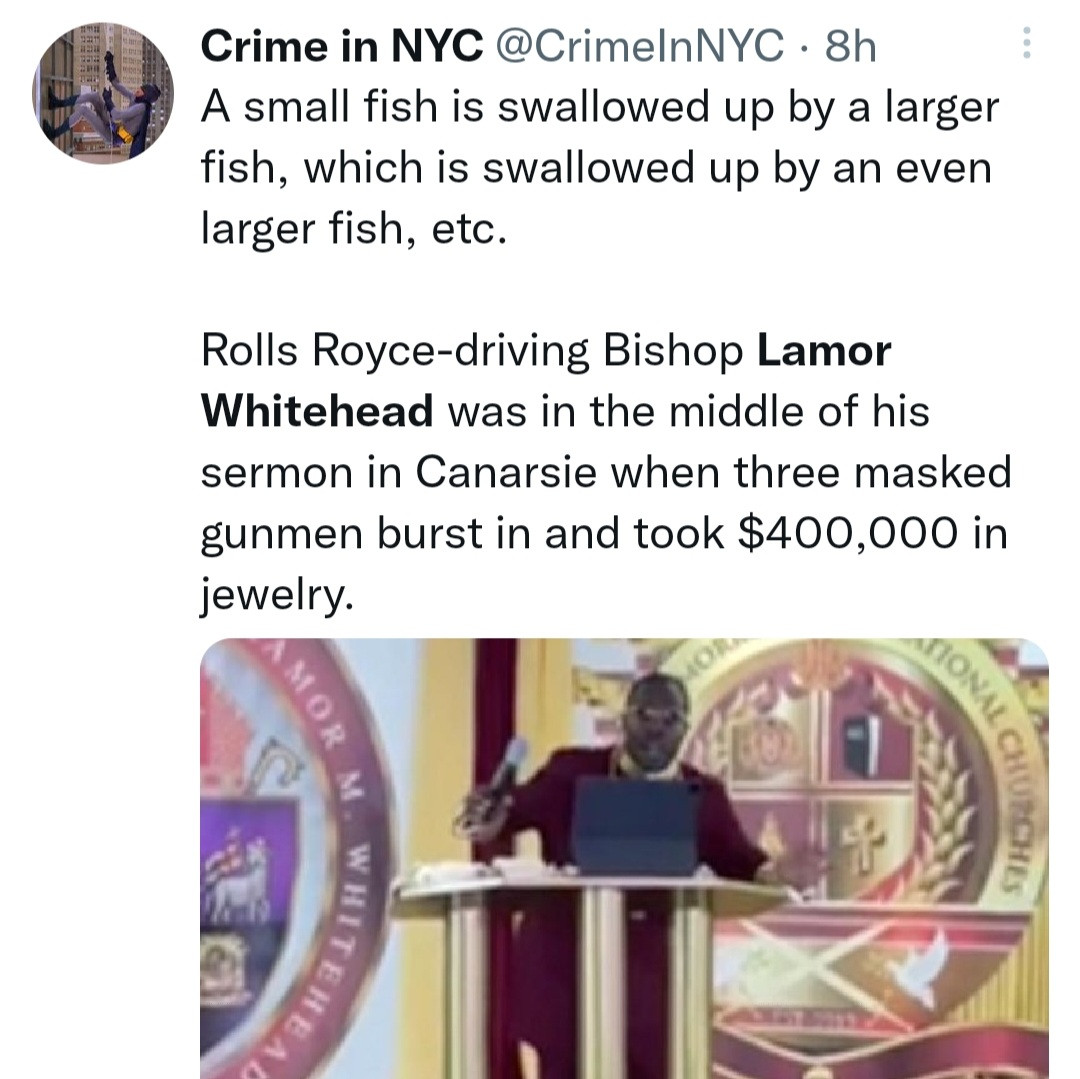 Whitehead believes his family was targeted because of the publicity he received when he helped turn in the suspect wanted in the fatal subway shooting of 48-year-old Daniel Enriquez in May.

“I turned him in, but the media called me ‘the bling, bling bishop.’ They had my Rolls-Royce caw all over everywhere and I feel that that played a part in this,” said Whitehead. “I think all pastors should be able to get permits for pistols.”

The NYPD is investigating and Whitehead said Mayor Eric Adams and top police brass have called him pledging support to find the suspects.

Meanwhile, Twitter users have taken to the platform to ask why the Bishop had on so much expensive jewelry while preaching, Some blamed his flamboyance for the attack.