The case of Chris Brown’s rape accuser is has taken a new turn as leaked voice notes and texts have painted a different picture of events.

On Tuesday night, March 8, singer, Chris Brown shared alleged evidence showing the lady who accused him of drugging and raping her, begging to see him after the alleged assault.

The singer took to his Instagram Story to post a video in which he played an alleged voicemail from the woman known as Jane Doe. In the audio message sent on August 23, 2021, months after the alleged rape, the woman said she wanted to “f**k with you again.”

“Well, you’re giving me mixed signals. You’re like reading my messages and stuff and you haven’t blocked me yet so I’m guessing you don’t hate me,” she said in the audio clip.

“I just wanna see you again, I mean, you just answered the phone and then you just hung up. Like, just let me know. Like, if you want me to leave you alone I definitely will, but I really just want to f**k with you again.” 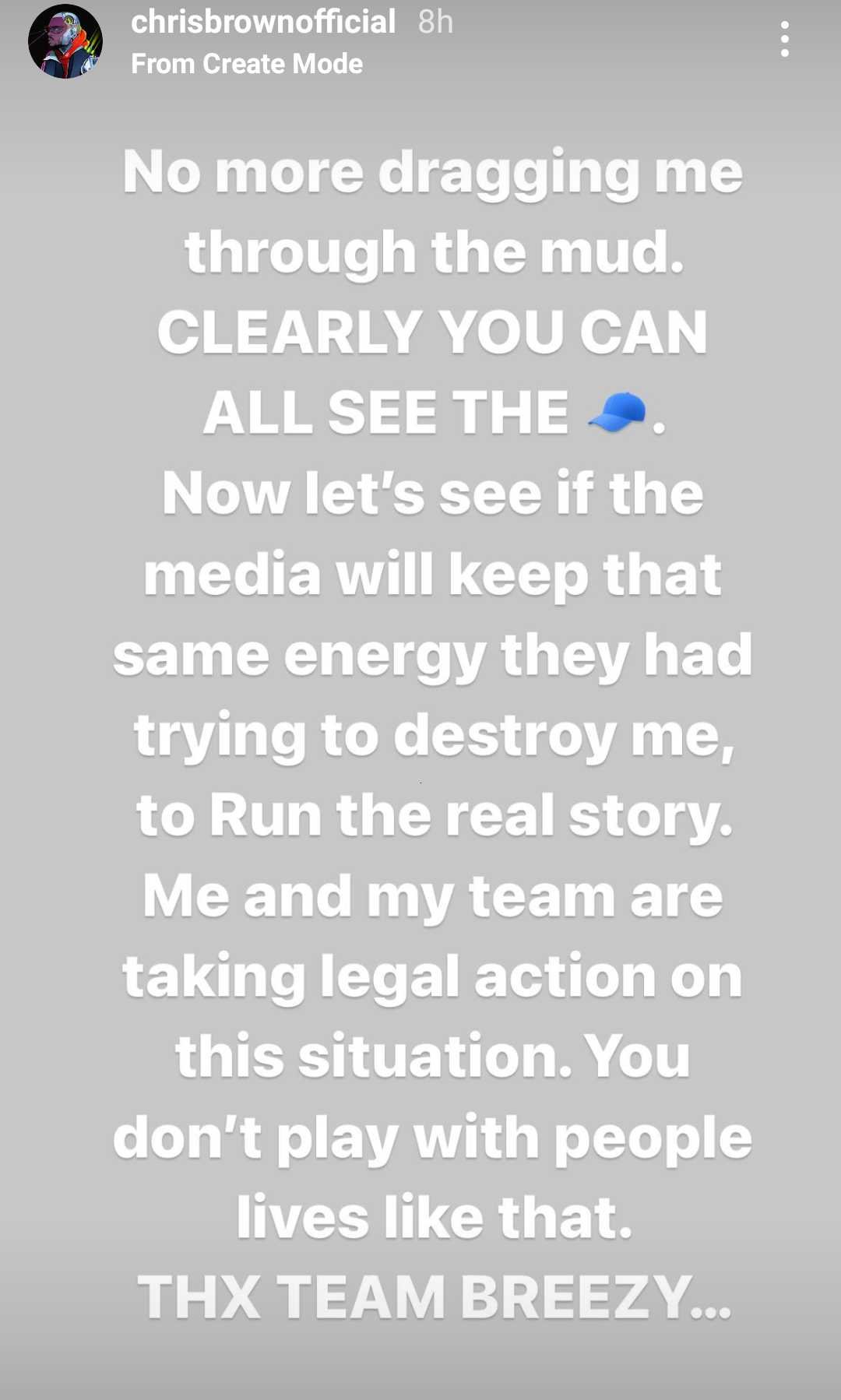 After leaking the audio message, Chris continued to defend himself in another instastory. “No more dragging me through the mud. CLEARLY YOU CAN ALL SEE THE [a cap emoji],” he wrote .

“No let’s see if they have same energy they had to destroy me, to run the real story. Me and my team are taking legal action on this situation. You don’t play with people lives like that. THX TEAM BREEZY.”

Radar online who obtained text messages from December 31, 2020, through August 26, 2021 between the pair say they lady described in court documents as ‘jane’ additionally sent racy texts and nudes to Chris almost immediately after the alleged incident.

The site obtained the alleged text messages One day after the alleged incident, she texted the star, “I wanna f**k u tonight at midnight lol.”

“Make some time for me tonight,” the girl who is a dancer texted a couple of days later.

After Chris snubbed her, she texted again, “And I have a question. Do u just be wanting to f**k me? Or can we hang out like on some child s**t during the day? I know u busy and it’s cool if u just wanna f**k. I just wanna know my role.” 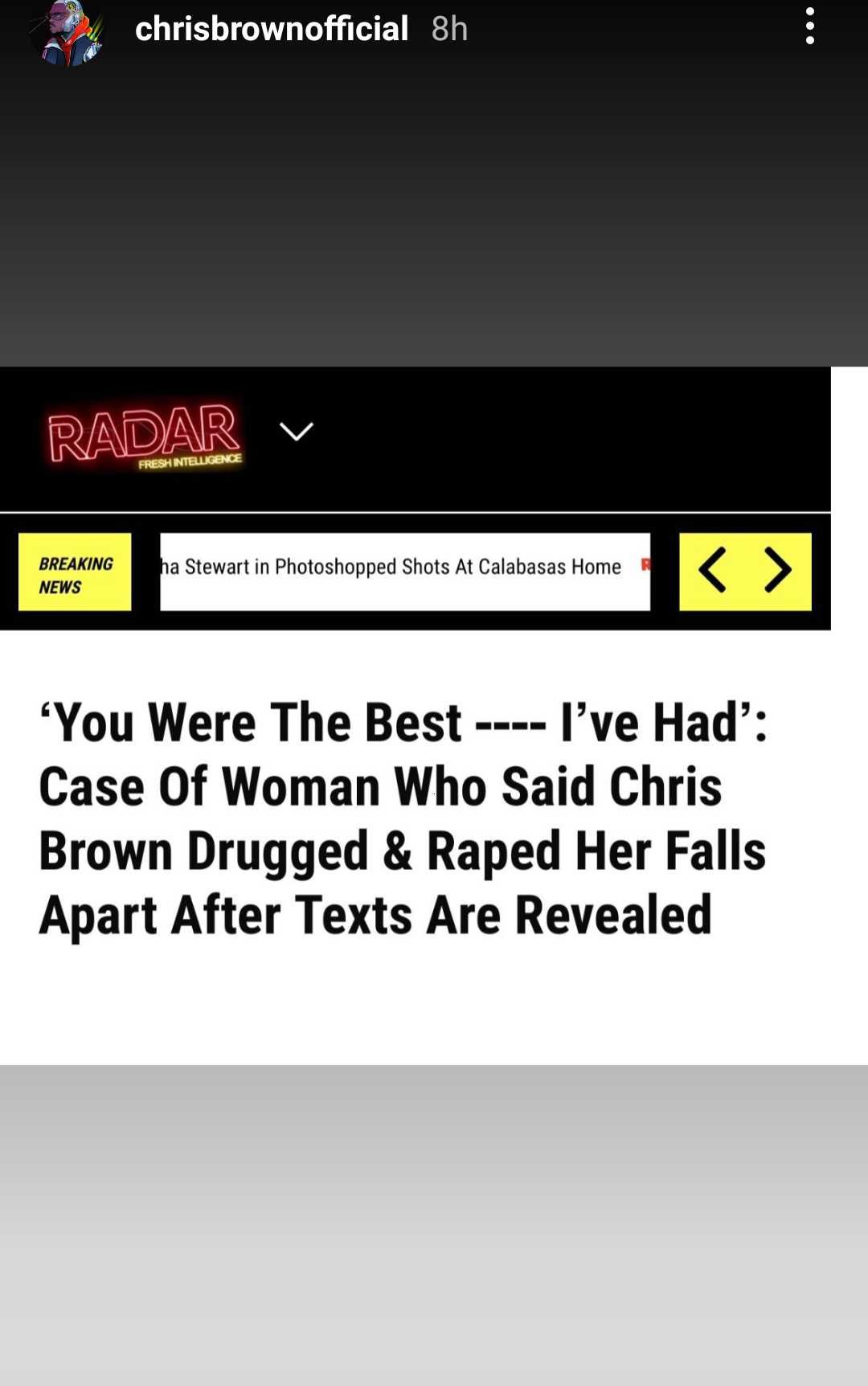 “Will I ever be able to see u again?” she wrote again in June 2021. “U were honestly the best d**k I’ve had (emoji) lol I just want it again. Why are you playing with meee…lol.” Chris still did not respond.

Finally, almost nine months after the alleged rape, she said, “U knew full well I wasn’t pressing u about no ???? U told me to stay and then gonna try to play me? Nah that’s crazy I didn’t deserve that but u def got it.”

Now in January 2022, more than a year after their alleged sexual encounter, the woman sued Chris for allegedly drugging and rapping her during a yacht party in Miami on December 30, 2020. The woman said the 32-year-old star gave her a mixed drink that made her feel “disoriented.”

Afterward, she claimed Breezy led her into a bedroom where he allegedly removed the woman’s bikini bottoms and started kissing her. The accuser said she mumbled for Chris to stop, but he didn’t listen to her and raped her. She recalled him jumping up and announcing he was “done” after he ejaculated inside her. The woman also said Chris texted her the next day and demanded she take Plan B, which she agreed to do as shown in the leaked texts.