Almost 250 million people in China may have caught Covid-19 in the first 20 days of December, according to an internal estimate from the nation’s top health officials, Bloomberg News and the Financial Times reported Friday.

If correct, the estimate – which CNN cannot independently confirm – would account for roughly 18% of China’s 1.4 billion people and represent the largest Covid-19 outbreak to date globally.

The figures cited were presented during an internal meeting of China’s National Health Commission (NHC) on Wednesday, according to both outlets – which cited sources familiar with the matter or involved in the discussions. The NHC summary of Wednesday’s meeting said it delved into the treatment of patients affected by the new outbreak.

On Friday, a copy of what was purportedly the NHC meeting notes was circulated on Chinese social media and seen by CNN; the authenticity of the document has not been verified and the NHC did not immediately respond to a request for comment.

Both the Financial Times and Bloomberg laid out in great detail the discussions by authorities over how to handle the outbreak. 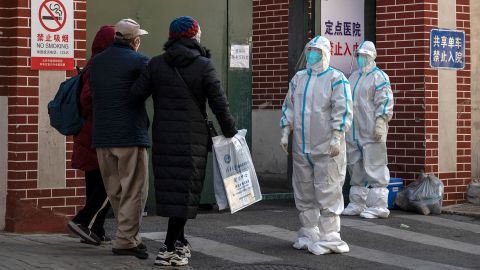 Among the estimates cited in both reports, was the revelation that on Tuesday alone, 37 million people were newly infected with Covid-19 across China. That stood in dramatic contrast to the official number of 3,049 new infections reported that day.

The Financial Times said it was Sun Yang – a deputy director of the Chinese Center for Disease Control and Prevention – who presented the figures to officials during the closed-door briefing, citing two people familiar with the matter.

Sun explained that the rate of Covid’s spread in China was still rising and estimated that more than half of the population in Beijing and Sichuan were already infected, according to the Financial Times.

The estimates follow China’s decision at the start of December to abruptly dismantle its strict zero-Covid policy which had been in place for almost three years.

The figures are in stark contrast to the public data of the NHC, which reported just 62,592 symptomatic Covid cases in the first twenty days of December.

How the NHC came up with the estimates cited by Bloomberg and the Financial Times is unclear, as China is no longer officially tallying its total number of infections, after authorities shut down their nationwide network of PCR testing booths and said they would stop gathering data on asymptomatic cases.

People in China are also now using rapid antigen tests to detect infections and are under no obligation to report positive results.

Officially, China has reported only eight Covid deaths this month – a strikingly low figure given the rapid spread of the virus and the relatively low vaccine booster rates among the elderly.

As crematoriums fill up, China shifts how it counts Covid deaths

Only 42.3% of those aged 80 and over in China have received a third dose of vaccine, according to a CNN calculation of new figures released by the NHC on December 14.

Facing growing skepticism that it is downplaying Covid deaths, the Chinese government defended the accuracy of its official tally by revealing it had updated its method of counting fatalities caused by the virus.

According to the latest NHC guidelines, only deaths caused by pneumonia and respiratory failure after contracting the virus are classified as Covid deaths, Wang Guiqiang, a top infectious disease doctor, told a news conference Tuesday.

The minutes of the Wednesday closed-door NHC meeting made no reference to discussions concerning how many people may have died in China, according to both reports and the document CNN viewed.

“The numbers look plausible, but I have no other sources of data to compare [them] with. If the estimated infection numbers mentioned here are accurate, it means the nationwide peak will occur within the next week,” Ben Cowling, a professor of epidemiology at the University of Hong Kong told CNN in an emailed statement, when asked about the purported NHC estimates.