Hacking group Anonymous have declared a ‘cyber war’ against the Russian government after President Vladimir Putin announced a full-scale invasion of Ukraine.

“The Anonymous collective is officially in cyber war against the Russian government. The Russian armed forces are preparing a large-scale bombing operation in the capital of Ukraine,” the Anonymous hacker group tweeted on Friday, February 25.

Anonymous also claimed responsibility for the attack on the website of the Russia Today TV channel known as RT. 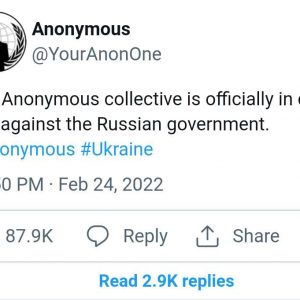 In another tweet, the group said, “The Anonymous collective has taken down the website of the Russian propaganda station RT News.”

Also, major Russian websites came under a denial-of-service attack on Thursday, possibly in retaliation for the similar DDoS attacks on Ukrainian websites by Russian hackers.

According to reports, the websites of Ukraine’s defense, foreign and interior ministries were unreachable or painfully slow to load on Thursday morning.

On February 24, Russian President Vladimir Putin said he authorised Russian troops to carry out a special military operation in the Donbass region of Ukraine.

The Russian premier said the Russian military action aims to ensure a “demilitarization and denazification” of Ukraine and called on Ukrainian servicemen to lay down arms and leave the combat zone.