Nigerian writer Tobe Osigwe has stated that some parents who suffer to provide their children the best of education overseas have now come to regret such gesture.

Osigwe made the claim in a Facebook post he shared which captured the discussion he had with a senior colleague who travelled to Canada to see his two children.

According to the writer, the kids were rude to their father and he felt like he had lost the two of them.

Osigwe added that while Nigeria is suffering massive infrastructural degradation and institutional decay, others are also suffering from some kind of socio-cultural indoctrination which he described as “Misidentity Crisis”.

A senior colleague told me recently how a good confidant of his travelled out to visit two of his children that are schooling in Canada. Upon arrival, her daughter just said ‘welcome’ and went out. The man was left inside with the other one, his son.

He was trying to chat him up but the boy was more preoccupied with his gadget. After a long forlorn moment, the man asked where the daughter went to? He was told that she was outside with her male friend. The man asked how can? “How can he come all the way from Nigeria to come and visit them and the daughter will be out discussing with a visitor.”

The daughter was summoned. The teenager came inside and gave the father the chiding of his life. She warned him not to interrupt her. In her words, “did I not tell you welcome when you came in?”. The man was shocked to his teeth.

The man was supposed to stay for a month. But he quickly cut the visit short. He left Canada in a week. He came back quickly to stop his first child who just graduated from a Nigerian University from traveling out to further his studies. In the man’s words, “he has lost those two in Canada, therefore he has to do all he can to hold on to the remaining one in Nigeria”.

I see many people laughing at some of us in Nigeria. Yes, we may be suffering massive infrastructural degradation and institutional decay out here but some of our people out there are also suffering from some kind of socio-cultural indoctrination. A kind of Misidentity Crisis. The grass is not always greener on the other side you know.

It is important we note that some of the fancy pictures those abraod intimidate us with maybe coming at a great price. While we pity for those of us in Nigeria, we should also pity for our brothers and sisters abroad who have forgotten their culture and the importance of holding on to it in a strange land.

May parents who suffer to provide their children the best of education overseas but have now come to regret such gesture find the fortitude to bear their loss. The breakfast dey reach everybody. Enye ndi ebe a, enye ndi ebe a. 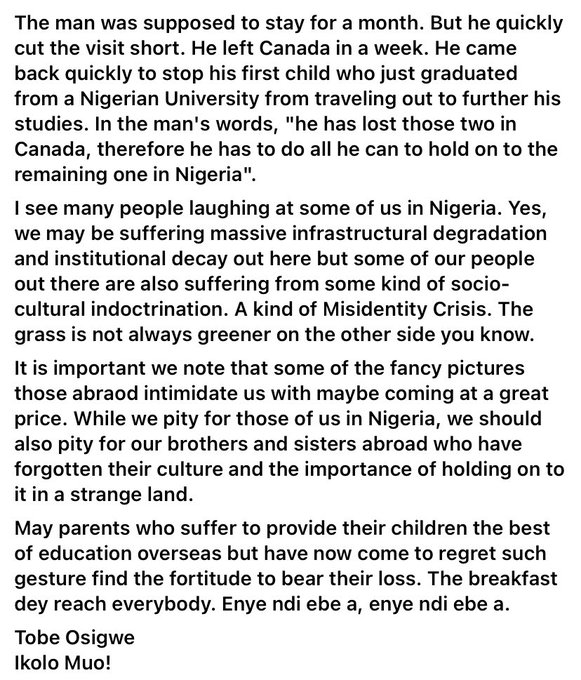