The comedian complained that Portable has sacked two managers in less than a year and he would no longer have him perform in his show.

Drama As Wife Confronts Sidechick For Snatching Her Husband (Video)

Controversial up and coming singer, Portable aka Zazoo has been removed as one of the guest artists performing at a show in Canada.

According to the MC, the fast-rising singer was dropped because of his attitude. The funnyman complained that Portable has sacked two managers in less than a year and he would no longer have him perform in his show.

He went further to say that he has written to immigration to deny his visa application.

“For those that are asking why I removed Idamu Adugboyin from my May 22 show. Talent is not enough, a beautiful song without a beautiful attitude is beautiful nonsense.

“Two managers in less than a year, even sack innoce3nt DJ that his job na to play song and scratch shaka shake. I cannot koshi mero a sorry. All transactions canceled and Ijoba danku I’m sorry, no one should use my invite, please. I already wrote to immigration to deny the visa,” he wrote. 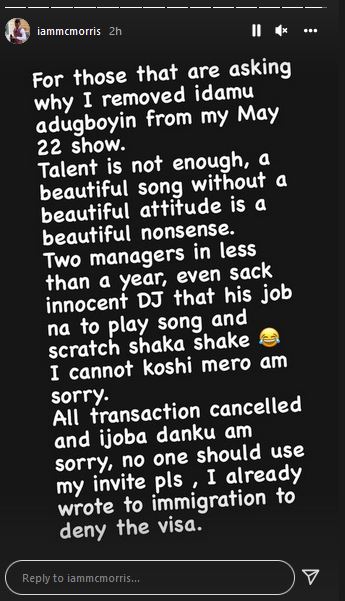