An Oyibo lady has given an unexpected response to an online scammer aka yahoo boy who tried to scam her with a fictitious claim.

The young woman who seems to be informed of happenings in Nigeria, shared a video showing how she exposed the yahoo boy after he asked her for $200.

In a pop up screen message, the man said; “My laptop was blocked. I need $200 google play card from you to open it.”

The lady known as @mama_esosa on TikTok then responded in Pidgin English and pointed out that he is obviously an amateur. 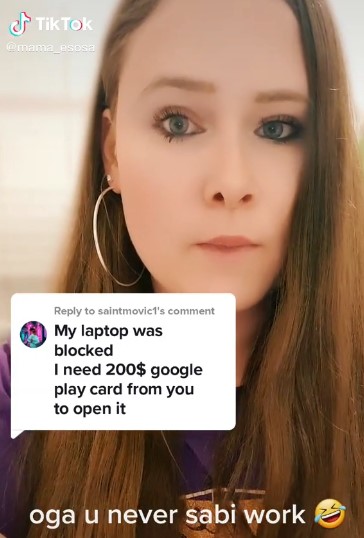 She further noted that $200 (N83k) is a little amount of money to get through fraud. She told the person to go and up his game if he will stand a chance of getting a client.