A young lady who seems to have mastered the art of speaking with both Nigerian nd foreign accents has gotten the attention of social media users.

The Nigerian woman identified as Bella amazed many netizens with her ability to code-switch so smoothly from speaking Pidgin English to British English. 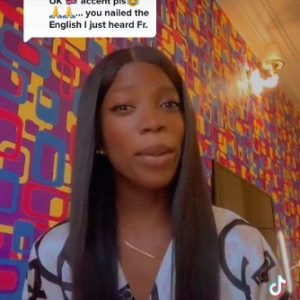 In a video she shared on her Instagram page, in response to someone asking her to speak with her British accent, she jokingly said that she is not the one in the video the person was referring to.

Nigerian Lawyer Safely Lands in Trouble in the U.K for Telling a Jobseeker “I Like What I See ”

She gave the above response while speaking pidgin English. However, seconds later, Bella switched to a British accent and said she was only joking about he initial comment.

The woman added that she loves her foreign accent even though it is not 100% refined.