Overweight children may be more prone to getting dementia in old age, a 30 year old research suggests.

A study of 1,200 children, who were followed for 30 years, found fitter and skinner youngsters had better thinking skills later in life compared to father youngsters.

Scientists say they believe their enhanced cognitive ability could go on to shield them losing their memories in their old age. 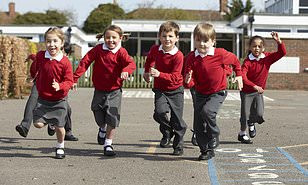 One third of youngsters become fat by the time they start secondary school according to the WHO who claim child obesity rates have soared the last decade due to junk food diets and sedentary lifestyles.

staying healthy and exercise in middle-age wards off the neurological disorder.

Fresh research published in the Journal of Science and Medicine in Sport, suggest the protective effect of exercises against dementia could start even earlier in life.

‘Developing strategies… are important because it could contribute to improvements in cognitive performance in midlife,’ she said.

‘The study also indicates that protective strategies against future cognitive decline may need to start as far back as early childhood.’

The children also had their waist-to-hip ration taken to measure how fat or thin they were.

Participants were tested again between 2017 and 2019, when they were in their 40s — but this time for their cognitive ability.

Scientists found those who were fitter and thinner as children scored higher on the memory quizzes looking at their processing speed and attention.