Kanye West took to Instagram on Monday to share his texts with his estranged wife, Kim Kardqshisn, after he sent her a truckload of flowers.

The rapper asked his fans not “do anything physical” to Pete Davidson, at the request of Kim Kardashian. 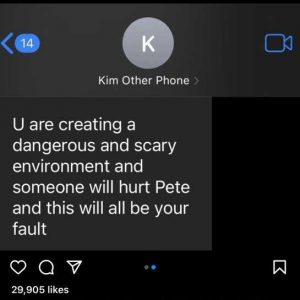 In screenshots shared, Kanye allegedly received a text from Kim, who tells him that he’s “creating a dangerous and scary environment,” which could result in something happening to Davidson.

“U are creating a dangerous and scary environment and someone will hurt Pete and this will all be your fault,” the text reads.

West said he will “handle the situation myself” in the post, which included a screenshot of the text, along with a photo from the 2001 film Baby Boy.

West shared another portion of his alleged text exchange with Kim where she tries to further convince him of the potential dangers of his one-sided social media feud with Davidson.

Kanye responded to Kim’s message: “I will always do everything to protect you and our family forever.

“And I listened to you and told everyone to make sure nothing physical happens to Skete.”

After sharing those posts, Kanye sent out another one showing Kim asking him why he keeps putting their exchanges up on social media.

“Why can’t you keep any of our conversations private???” Kim apparently texted Kanye, to which he responded, “Cause I got a text from my favorite person in the world.” He continued, “I’m your number one fan. Why wouldn’t I tell everyone!!!!”

He then added a lovestruck emoji in the caption.

Hours before Kim’s message, Kanye posted a paparazzi photo from Kardashian and Davidson’s pre-Valentine’s Day date at the Italian restaurant Lilia in Brooklyn?? Saturday night, and expressed his faith that he and Kim will get back together again. 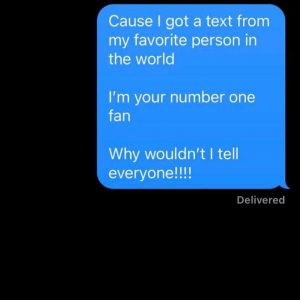 He followed that up with a series of screenshots from people encouraging him to keep fighting to win her back, and advised his followers that “IF YOU SEE SKETE IN REAL LIFE SCREAM AT YHE LOOSER AT THE TOP OF YOUR LUNGS AND SAY KIMYE FOREVER.”

Kanye has now deleted almost all his posts, including the ones where he shared screenshots of the messages he got from Kim.

He only left the post where he shared photos of Kim and their kids and begged God to bring their family together, and another advertising his album, Donda 2.

Social media users have pointed out that Kanye is being manipulative and his recent actions are toxic. 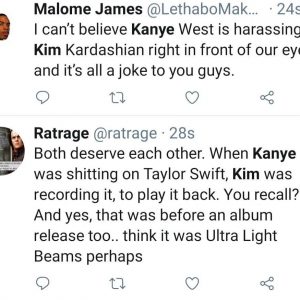