A Southwest US-based Ghanaian passenger has been arrested by air marshals in an attempt to open a plane door mid-flight as per new details made available.

According to her, “Jesus told her” to do it.

Elom Agbegninou, 34, was on the Ohio-bound flight from Texas on Saturday afternoon when she allegedly became frustrated that flight attendants prevented her from reaching the emergency exit.

When a fellow passenger intervened by tackling Agbegninou, she responded by biting the person on the thigh, refusing to let go until the victim forced their fingers into her jaw. 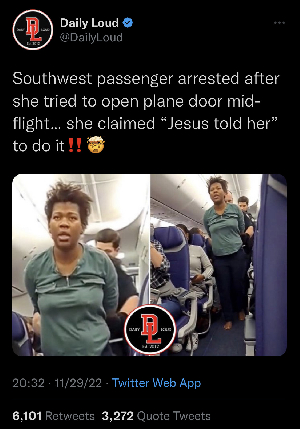 The crazed woman then started whacking her head on the plane floor, claiming “Jesus told her to fly to Ohio and Jesus told her to open the door,” the documents released by the US District Court for the Eastern District of Arkansas on Monday show.

According to the criminal complaint, Agbegninou is expected to face charges of assault within maritime and territorial jurisdiction and interference with flight crew members and attendants.