Iranian players refused to sing their national anthem before their World Cup match against England in an apparent expression of support for anti-government protests in their home country.

There has been a fierce crackdown on protests in Iran sparked by the death in custody of Mahsa Amini in September.

22-year-old Amini was detained by morality police for allegedly breaking the strict rules around head coverings.

Man Spends £1,500 Every Month to Stop Himself from Ageing

Human rights activists have said more than 400 protesters have been killed and 16,800 others arrested in a crackdown by Iran’s security forces.

Iran’s leaders say the protests are “riots” orchestrated by the country’s foreign enemies including the US and Israel.

On Monday, November 21, fans shouted and jeered as the country’s anthem was being played, others held up signs saying “Woman, Life, Freedom” while the players refused to sing the anthem.

Iranian fans could also be heard chanting “Ali Karimi” in the first-half in reference to the former footballer who is one of the most outspoken critics of the Islamic Republic and one of the most popular faces of the protest movement.

The fans could also be heard chanting “Be-Sharaf”, which means dishonourable in Persian. This is an adjective that protesters have used against security forces in Iran.

Kung fu legend, Bruce Lee ‘may Have Died from Drinking too much Water’ – Doctors Claim

Speaking before the game Iran captain Ehsan Hajsafi said the players “support” those who have died.

Coach Carlos Queiroz said his players were “free to protest” over women’s rights in their home country as long as it “conforms with the World Cup regulations and is in the spirit of the game”.

Queiroz added that the political unrest at home had taken a toll on his squad. 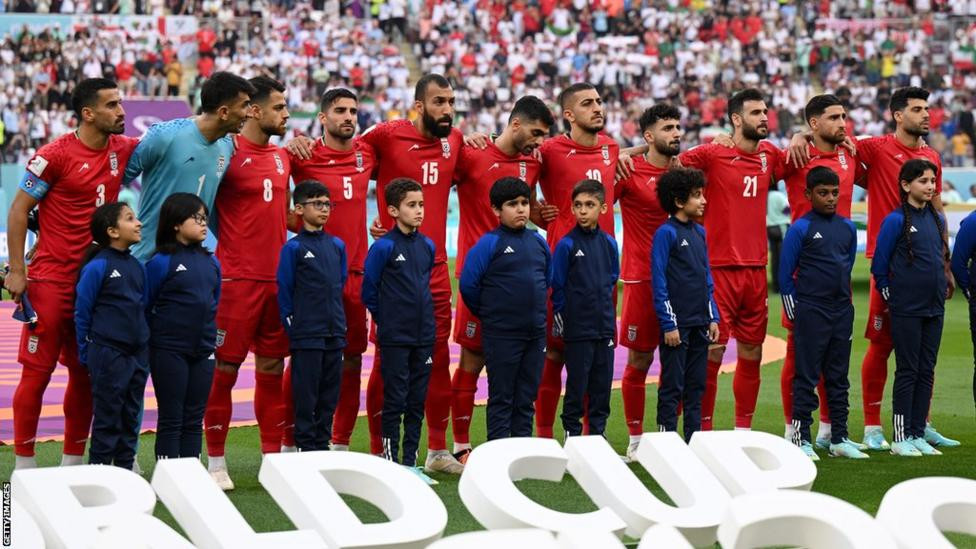 “It is not right to come to this World Cup and ask them to do things that are not their responsibility,” added the former Manchester United assistant. “They want to bring pride and joy for the people.

“You don’t even imagine behind the scenes what these kids have been living in the last few days, just because they want to express themselves as footballers.”