RUSSIA has announced the production of its first drones capable of triggering radioactive tsunamis and wiping out enemy naval bases.

These nuclear torpedoes are intended to change the oceanic theatre of war by laying waste to enemy coastlines with 300ft tsunamis and striking naval equipment with an alleged “unlimited range”.

TASS continued with the chilling announcement: “It will be soon delivered to special-purpose nuclear-powered submarine Belgorod.” In October, NATO issued a warning that they lost track of Belgorod – a 30,000 ton nuclear submarine – somewhere in the Artic. It provoked fears Putin might try and use his prized monster weapon in the Ukraine war.

The mega-submarine, Russia claims, is capable of carrying eight of the torpedo drone weapons which could release a nuclear Armageddon.

Yet, the largest sub the world has ever seen was thankfully spotted again elsewhere in Arctic after a few days. 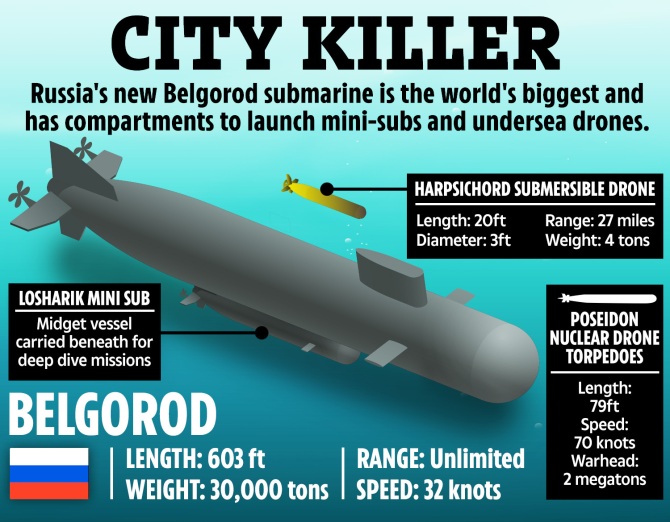 The so-called “weapon of the apocalypse” is specially designed for covert missions alongside its nuclear cargo, including sabotage and spying.

Dmitry Kiselyov, an aggressive mouthpiece of the Russian propaganda machine, told TV viewers recently that these new drones could “plunge Britain into the depths of the sea”.

“It approaches the target at a one kilometre depth with the speed of 200 kilometres per hour.

“There is NO way to stop this underwater drone,” he declared.

Putin officially announced the Poseidon project in 2018, but it’s been speculated that plans for this terrifying warhead have been in the works since the Cold War.

“There is no weapon that can counter them in the world today,” Putin claimed in 2018. Further details about the fearful nuclear weapon have been a heavily guarded Russian secret.

A successful field test was said to have been carried out in 2021, but Russia intends to finish its doomsday project by 2027.

The startling development of the drones brings Russia closer to this target.

The announcement comes as Putin-ally and retired army general called for the UK to be “demolished from the face of the earth” over its support for Ukraine.

Andrey Gurulev’s bizarre statements made on state TV continued with: “We have to remember about London so they don’t try to steal our victory.”

“If it did not exist, there will be victory,” the pro-War fanatic said.

Monday’s news that production has started on Poseidon is likely intended to intimidate the West as Putin suffers losses in Ukraine.

Prime Minister Rishi Sunak promised on Sunday that he would be providing further heavy weaponry to Ukraine since Russia ramped up its missile strikes over the weekend.