A dramatic and chaotic scene of a man hanging onto a high tension cable and refusing to come down has been captured on tape.

The man alleged to be a thief climbed the electric pole and stood on the wire until youths used ladders to try to bring him down. 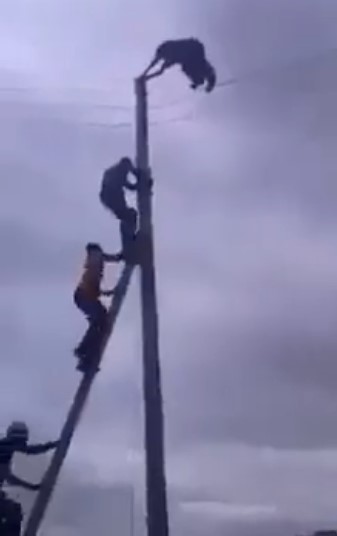 In a video which has gone viral, no less than seven men climbed ladders and were struggling with the suspected thief who resisted them with all his might.

They grabbed his leg with the intention of pulling him down, but he maneuvered in such a way that it is his trousers that was pulled off.

However, after minutes of battling to get him, they successfully pulled him down from the wire which he was gripping firmly throughout the whole experience.

The Height of it! pic.twitter.com/lCGyLZDsJR