A model who bought her man a sex toy that looks like her and encouraged other women to do the same now fears her man prefers the doll.

Charlotte Grey opened up on TikTok about her boyfriend’s attachment to the doll.

She filmed her boyfriend sitting with the doll on his lap and expressed concern that he now prefers it to her. 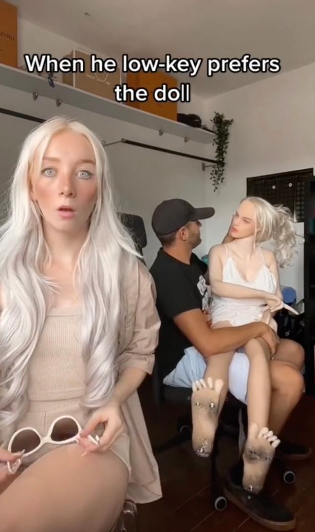 “When he low key prefers the doll…” she captioned the video.

Viewers found the clip hilarious and many left comments claiming they would fear that happening if their boyfriend had a sex doll.

She also shared another video where she joked about throwing the sex doll out while her boyfriend insists on keeping it. She captioned the video: “When your man falls in love with girl we’re making [corn] with”.