It comes as Western leaders gathered for crisis talks in the German city of Munich over fears the Russian president could order a military invasion of Ukraine at any time.

Putin oversaw strategic nuclear exercises involving the launch of hypersonic ballistic missiles and other weapons in the latest show of strength as tensions between Moscow and Kyiv remain on a knife-edge. 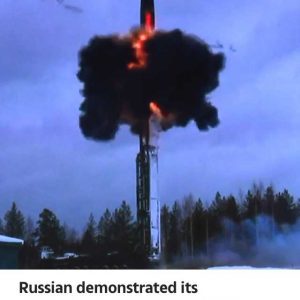 The Russian leader watched the drills from a “situation centre” in the Kremlin alongside his close ally, Belarusian leader Alexander Lukashenko.

Two ballistic missiles were launched – one from a site in northwest Russia and the second from a submarine in the Barents Sea – and hit targets thousands of miles away, according to the Kremlin.

The drills involved launches from warships, submarines, and warplanes as well as from land.

In the footage, top Russian general Valery Gerasimov tells Putin: “The main purpose of the exercise is to train the strategic offensive forces’ actions aimed at delivering a guaranteed defeat of the enemy.”

The Kremlin said ships and submarines from the Northern and Black Sea Fleets launched Kalibr cruise missiles and Zircon hypersonic missiles at sea and land targets.

Russian forces also carried out a launch of the Iskander land-based cruise missile from the Kapustin Yar test site in Astrakhan, southern Russia.

An RS-24 Yars thermonuclear armed intercontinental ballistic missile was also shown off in a video.

“All the missiles hit their targets, confirming their performance objectives,” the Kremlin said, adding the drills included Tu-95 bombers and submarines.