VLADIMIR Putin “doesn’t give a s**t about sanctions” a Russian ambassador has said.

Viktor Tatarintsev was speaking as his country moved attack helicopters to its border with Ukraine, further raising invasion fears.

He bluntly warned that “the more the West pushes Russia, the stronger the Russian response will be”.

The Kremlin’s ambassador to Sweden brushed off the threat of sanctions and boasted Russia had become “more self-sufficient” in response to the ultimatums.

Tatarintsev told the Aftonbladet newspaper: “We are more self-sufficient and have been able to increase our exports.

“We have no Italian or Swiss cheeses, but we’ve learned to make just as good Russian cheeses using Italian and Swiss recipes.”

He said the punishments have allowed his nation’s economy and agricultural sector to thrive.

Meanwhile civilians in Ukraine have been preparing for an invasion by learning to fire weapons.

The country also faces being cut off by air amid reports insurers Lloyds of London will cease proving cover to airlines who fly there.

It comes after President Joe Biden warned Vladimir Putin of “swift and severe costs” after claims Moscow is planning to invade its neighbour within days.

And in one of the most ominous signs of invasion yet, Putin has stationed a range of choppers on the border with Ukraine.

Information received by the Secret Service, CIA and other intelligence services has even gone as far to outline the routes that individual Russian units will take, along with the roles they will play, it reports.

Video showed choppers massing in the in western Belgorod region just 19 miles from Ukraine in one of the most ominous invasion signs yet seen.

Similar aircraft were seen at the same site in 2014 when Moscow intervened in the Donbas and annexed Crimea.

They were spotted are seen in Belgorod, Nizhny Novgorod region, Tver, Ulyanovsk and Yaroslavl amid suspicions they are being moved to the Ukraine war zone.

Bloody conflict still looms after a crunch phone call between the two presidents ended in deadlock with 130,000 troops on the border.

The leaders talked for one hour and two minutes – but made no real progress amid intelligence reports that Putin will trigger a bomb blitz and ground invasion on Wednesday.

Afterwards the White House said: “President Biden was clear that, if Russia undertakes a further invasion of Ukraine, the United States together with our allies and partners will respond decisively and impose swift and severe costs on Russia.

Leaving the door open to further talks, the US leader said he was prepared to engage in diplomacy while being “equally prepared for other scenarios”.

ASUU Declares Minister of Communication and Digital Economy Isa Pantami’s Professorship Illegal; FUTO VC and Others to be Sanctioned

The Kremlin said it would pause to review US and Nato responses to its proposals for security guarantees before announcing its next actions.

The Russian president has made the impossible demand that Ukraine should never be allowed to join western alliance Nato.

Putin aide Yury Ushakov accused the U.S of “artificially whipping up hysteria around an alleged Russian plans for the invasion, even providing the dates of such an invasion”

Air, rail and road transport is likely to be targeted nationwide, the US believes, along with the power grid to black-out the country.

Huge columns of vehicles and men were seen in Valuyki, western Russia, heading south towards the Ukraine border ten miles away.

Russia moved “atomic cannon” that can fire nuclear shells to Veselaya Lopan in Belgorod, also ten miles from the border.

More than 30 tactical exercises involving the Russian Navy’s Caspian flotilla, backed by helicopters and troops, will ramp up tension near Ukraine’s southern border from today.

Britons urged to flee the region began arriving back in the UK today, as families with newborn babies remained trapped.

British ambassador to Ukraine Melinda Simmons was remaining with a “core team” in Kiev, but some embassy staff and their families were being withdrawn.

Western leaders have threatened Moscow with a damaging package of sanctions in the event of a further incursion into Ukrainian soil.

Ukraine is not a Nato member and allies in the defence alliance have said they would not join fighting in Ukraine, but have bolstered forces in neighbouring nations and are threatening widespread sanctions.

Though the Kremlin insists it is not planning an invasion, US intelligence suggests Russia could fabricate a “false flag” pretext to attack.

US Secretary of State Anthony Blinken spoke to his counterpart Sergei Lavrov before the Biden and Putin’s head to head.

“I reiterated that further Russian aggression would be met with a resolute, massive, and united Transatlantic response.”

“The way they have built up their forces, the way they have maneuvered things in place, makes it a distinct possibility there will be major military action very soon,” he told CNN.

“But we have now been saying for some time that we are in the window, and an invasion could begin, a major military action could begin by Russia in Ukraine any day now – that includes this coming week, before the end of the Olympics.” 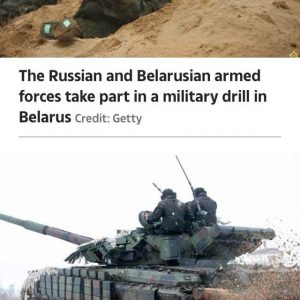 It was previously widely believed Russia would not attack before the end of the Winter Olympics on February 20 but the latest intelligence reports have cast doubt on that.

Pentagon said it would send 3,000 combat troops from Fort Bragg, North Carolina, to Poland to join 1,700 troops assembling there.

Last night, Brits were warned to leave Ukraine immediately as the imminent threat of war loomed.

The besieged country has increased exercises amid fears an invasion may come “at any time”.

Earlier this week, Boris Johnson said the continent stands at the “most dangerous point” since World War Two after flying to Poland to meet with leaders.