We’ve taken a giant step closer to a Jetsons-like future with the opening of Urban-Air Port’s Air-One, touted as the world’s first flying-taxi hub. Opened last week in Coventry, England, the station is being positioned as a pioneer for more than 200 electric vertical takeoff and landing ports that are planned to be built around the globe. Zero-emission drones will ferry passengers and transport cargo as part of what the company calls “the coming green air transportation revolution.” 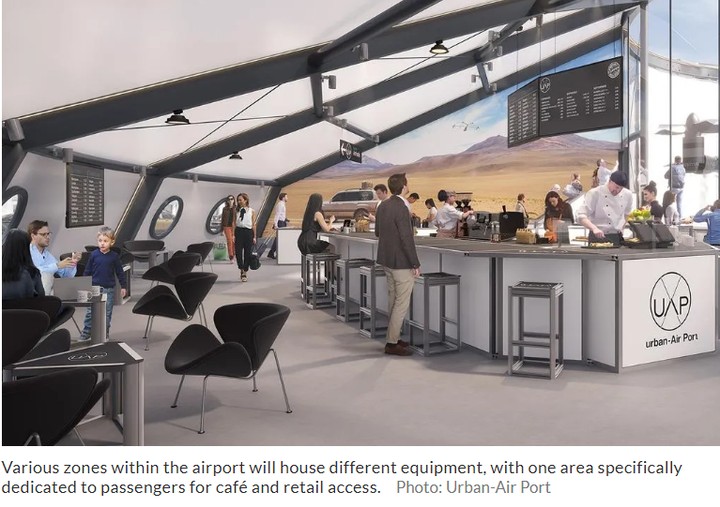 Don’t grab your suitcase just yet, though. Air-One is currently more of a model than a working vertiport. It’s intended to demonstrate the feasibility of a global network of hubs that could be constructed on land, placed on water, or even sit atop a skyscraper.

That versatility means that the vertiports could reach areas current air travel cannot, and they would also have a smaller environmental footprint with less congestion and air pollution. Vertiports would be positioned not just for passenger travel and package delivery, but also for emergency management and security and defense operations.

Constructed in just eleven weeks, Air-One has a 17,000-square-foot radial design that’s divided into zones. Different zones house a cargo and logistics hub, vehicle hangar, security screening area and command-and-control center, as well as a passenger lounge, café, and retail pop-up sites. The zones are anchored by a 56-foot circular platform that raises 19 feet for vertical takeoffs and landings. 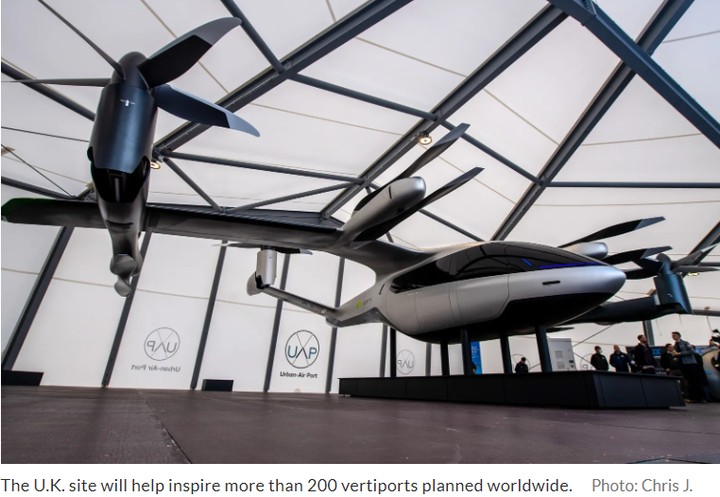 Urban-Air Port said that Air-One will demonstrate how purpose-built ground infrastructure can unleash the potential of advanced air mobility—the company reported a market expected to reach $1 trillion within the next 20 years.

Executive chair Ricky Sandhu called the unveiling of Air-One “the starting gun for a new age of transport.” Other vertiports are in the works in the U.S., Australia, South Korea, France, Germany, Scandinavia, and Southeast Asia. “Cars have roads. Trains have rails. Planes have airports. Now, electric vertical takeoff and landing (eVTOL) aircrafts have an Urban-Air Port,” Sandhu said in a statement.

Currently, Urban-Air Port is partnering with Supernal, a Washington, D.C. company designing electric air vehicles. Supernal’s concept eVTOL vehicle, the S-A1, is on display in the Air-One hangar, and Air-One will demonstrate eVTOL charging from off-grid hydrogen fuel cells, as well as cargo loading and unmanned flights, including one for West Midlands Police (in England). 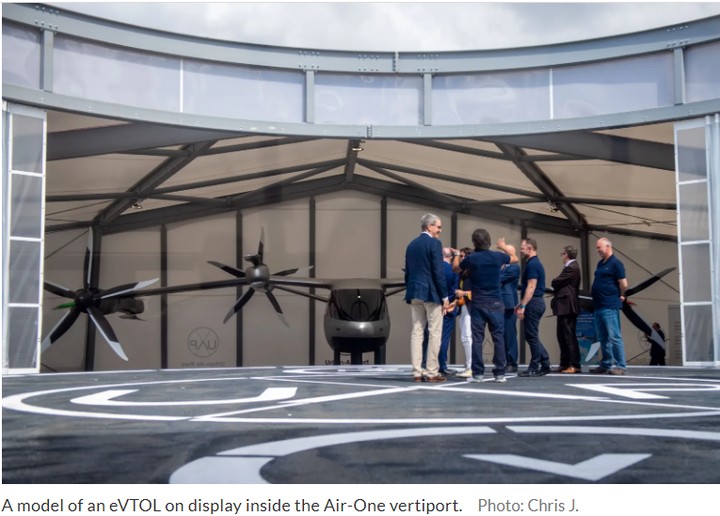 “The Coventry demonstration is an important first step forward to reimagining how people across the world will move, connect and live,” said Supernal chief commercial officer Mike Whitaker. Members of the public can order tickets to visit Air-One, located in a downtown Coventry, about three hours north of London.