The UK Government has announced that it will not grant asylum to members of terrorist groups in the Eastern part of Nigeria like IPOB.

2.2.1 IPOB is proscribed as a terrorist group by the Nigerian government, and members of the group and its paramilitary wing – the Eastern Security Network (created in December 2020) – have reportedly committed human rights violations in Nigeria (see Indigenous People of ‘Biafra’ (IPOB) and various media articles in Activities and Clashes between state and IPOB)

2.2.2 MASSOB has been banned, but is not a proscribed terrorist group in Nigeria. It too has reportedly been involved in violent clashes with the authorities (see Movement for the Actualization of the Sovereign State of ‘Biafra’).

2.2.3 If a person has been involved with IPOB (and/or an affiliated group), MASSOB or any other ‘Biafran’ group that incites or uses violence to achieve its aims, decision makers must consider whether one (or more) of the exclusion clauses under the Refugee Convention is applicable. Persons who commit human rights violations must not be granted asylum.

Catholic Priest, Canon Michael McCoy Took His Own Life after Learning Police Were Investigating Him over ‘Historic Allegation’, Coroner Rules

2.2.5 For further guidance on the exclusion clauses and restricted leave, see the Asylum Instructions on Exclusion under Articles 1F and 33(2) of the Refugee Convention, Humanitarian Protection and Restricted Leave. 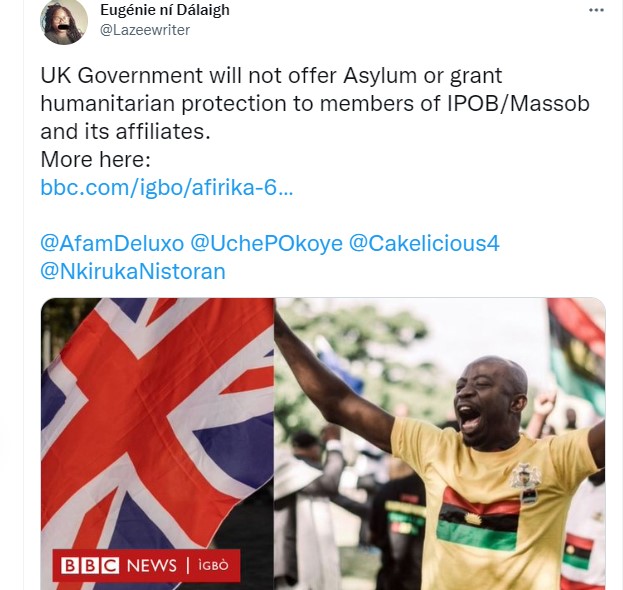