A video which has gone viral online shows a female teacher getting physical with a male student in class.

The boy walked into the classroom and it seems she did not approve of him leaving before so she tried to kick him out of her class. 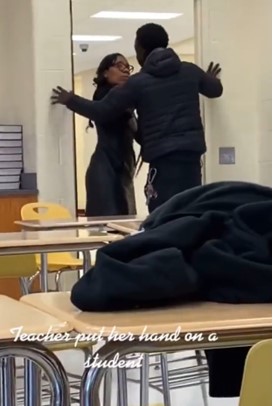 She could be seen jacking him by his clothes and trying to forcefully push him out but he kept trying to go to his seat.

He explained that he was in the bathroom but she did not want to listen to what he had to say in his defence.

In the the video, the student resisted the urge to touch her and said that if he does that there would be a problem .