While going on a sight seeing, they decided to stop by an ice cream stand, and it turns out the seller is one of those who plays tricks on customers. 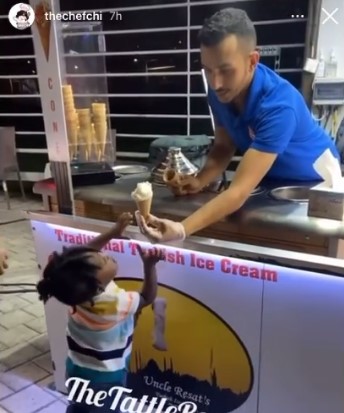 The boy wanted to collect an ice cream that his mum ordered but the vendor kept playing the sleight of hand trick and deprived him of the yummy flavoured ice cream.

His mum and her friends were laughing as the act took place but Ifeanyi was beginning to get tired of the trick, so much so that he wanted to walk away with the cone that had no ice cream but his mum brought him back.

The seller however continued with the play, forcing the little boy to just walk away and never turn back.

A post shared by The Tattle Room 🇳🇬 🌎 (@thetattleroomng)

Reacting, rheetaar wrote; My daughter would have scattered everywhere 😂😂😂😂

mufasatej; This guy go collect decking for my hand which kind play be this

darchy_kanem; 😂😂😂😂😂 na David temperament be this