The Catholic church in Ireland is seeking a ban on the release of a new film featuring a lesbian nun, because it ‘offends God’

The movie named Benedetta, was directed by ‘Basic Instinct’ director Paul Verhoeven and film company Mubi, and is set to be released on April 15 – aka Good Friday.

The film tells the story of a real-life 17th-century woman who becomes entangled in an affair with another nun in her convent, before their romance is discovered by the church.

The movie also appears to be marked by stigmata – the miraculous appearance of Jesus Christ’s wounds on a person’s body.

Loosely based on a true story, director Paul set his film on the 1986 non-fiction book Immodest Acts: The Life of a Lesbian Nun in Renaissance Italy.

The chosen release date of the film, which is meant for Easter coupled with the subject, means Benedetta was likely going to cause controversy among devoted Christians, who believe that being gay is a sin.

With the release just days away, a Catholic activist organisation is demanding the movie be pulled.

The Irish Society for Christian Civilisation (ISFCC) says it wants to ‘STOP MUBI’s & Verhoeven’s Benedetta Movie (sic)’, describing it as a ‘smart smut attack on the Holy Catholic Church.’

The petition describes the film as ‘highly touted, blasphemous and impure’, declaring it ‘a shocking attack on Good Friday… which horribly insults Our Lady and her Son.’ 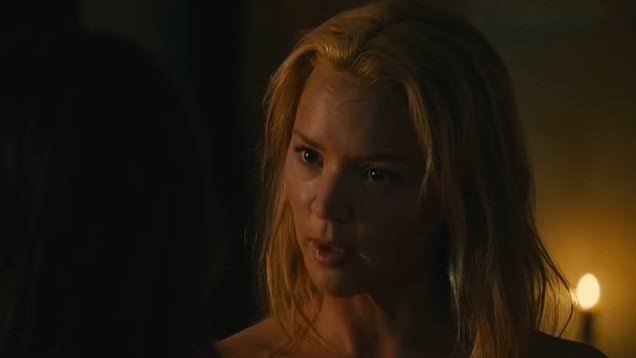 ‘It offends God, and countless Catholics all over the world.’

The ISFCC urged fellow Catholics to sign the petition, which so far has over 13,000 signatures.

Bird Poops on Joe Biden as He Makes Speech (video)

According to the ISFCC, Benedetta features ‘several Jesus-on-nun intense “make outs”, a statuette of Mary Most Holy used as a sex-toy (and) voyeuristic lesbian nuns’ “pornography”.’

The ISFCC called on filmmakers to ‘promote virtue, not vice.’