Oklahoma lawmakers on Thursday gave final approval to a bill that would ban nearly all abortions and would allow private citizens to sue anyone who helps women terminate a pregnancy.

The bill would take effect immediately upon being signed by Republican Governor Kevin Stitt, making it the most restrictive abortion ban in the United States.

The Republican-backed legislation bans abortion from the moment of “fertilization,” making exceptions only in cases of medical emergency, rape or incest. The bill text says it does not prohibit the use of contraception or emergency contraception.

Trust Women, which operates a clinic in Oklahoma City, called passage of the bill “gratuitous and cruel.”

“Our patients are frightened, confused about the new reality they now live in,” the clinic said in a statement.

The Center for Reproductive Rights, a global advocacy group based in New York, said on Thursday it would challenge the ban in state court.

Oklahoma is among the country’s Republican-led states rushing to pass anti-abortion laws this year, anticipating that the U.S. Supreme Court will soon overturn Roe v. Wade, the 1973 case that established the constitutional right to abortion.

A draft opinion leaked earlier this month showed the court’s conservative majority intends to overhaul federal abortion rights and send the issue of legalization back to individual states.

The Republican-backed laws remain vulnerable to legal challenges pending that ruling. A federal judge on Thursday extended a block on a recently-enacted in Kentucky law that would force clinics to stop offering abortions until they can meet certain requirements. read more

Nigerian Man Refuses to Pay S3x Worker He Slept with, Accuses Her of Giving Him tough Time (video)

Oklahoma Governor Stitt has said he will sign any anti-abortion legislation that reaches his desk.

The state already this month enacted a bill that banned abortions after six weeks of pregnancy, as opposed to fertilization. Like the latest measure, it relies on civil lawsuits to be enforced.

The enforcement provision in both bills was modeled after Texas legislation, which took effect in September and stopped clinics from performing nearly all abortions in that state.

But the enactment of Oklahoma’s own six-week ban this month has severely limited abortion services the state’s four clinics can provide.

If signed as expected, the newest bill would expand a region of the country where there is little to no legal abortion access, forcing patients to travel to states such as Kansas, New Mexico and Colorado to end their pregnancies.

Today, Oklahoma passed a law effectively banning abortion from the moment of fertilization—the latest in a series of blatant attacks on women by extremist legislators. It has never been more urgent that we elect pro-choice leaders at the local, state, and federal level. 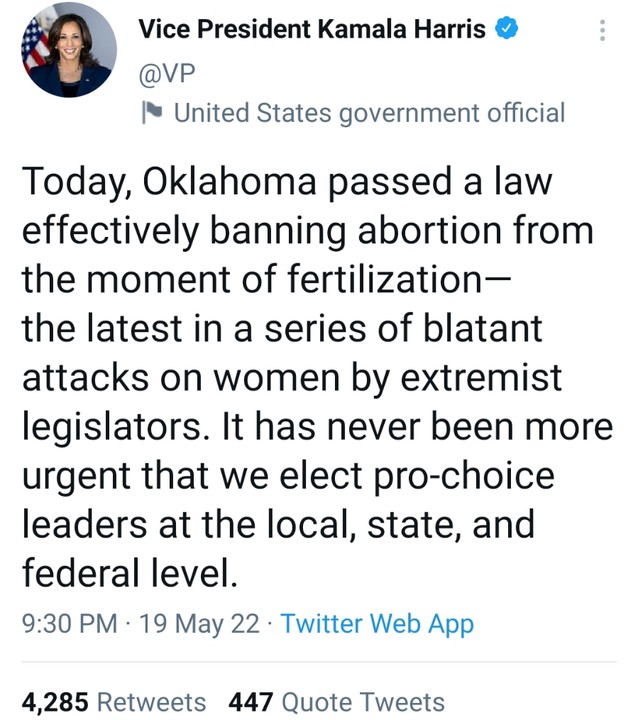