A widow was pictured sleeping outside after she was allegedly thrown out of her home by her in-laws just one day after her husband’s burial.

The burial held on Friday, March 25, and the widow was allegedly thrown out on Saturday, March 26.

In a post shared online, the widow is seen sleeping on the floor, wearing just a wrapper and head warmer. Her slippers is seen beside her. 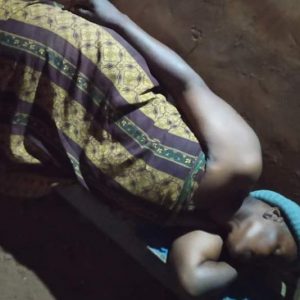 Her niece took to Facebook to call for justice for the widow who is from Nanka in Anambra state. According to her, the woman built the house with her money, yet that didn’t stop her husband’s family from allegedly throwing her out and locking the house to prevent her from gaining entrance.

The said neice claimed the widow was thrown out without her belongings and she has nothing with her, not even the clothes she’s meant to wear for her the burial service on Sunday, March 27.