Popular Catholic Priest, Fr Oluoma Chinenye John has challenged those claiming that polygamy is allowed in Christendom to point out where it is captured in the Holy Bible.

Recall that shortly after actor Yul Edochie announced he had picked a second wife, many Nigerians kicked against his action, They argued that as a Catholic and as someone whose father, Pete Edochie, is a Knight, it is unchristianly to take a second wife.

However, clergyman and former presidential aide, Reno Omokri argued that Polygamy is no sin and that some great men in the Bible like Abraham and David and had multiple women in their lives. He opined that the only people barred from polygamy were Bishops, General overseers and elders.

However in a post shared on his Facebook page, Fr Oluoma averred that no part of the bible justified polygamy, insisting that monogamy has been the ideal kind of marriage instituted by God since creation.

”IS IT IN THE BIBLE?

SHOW ME WHERE IT IS IN THE BIBLE.

IT IS IN THE BIBLE.

These are one question and two expressions that can easily be misconstrued and erroneously parroted by ignorant Christians.

Hear me, it’s not everything in the Bible that we do. In Gen 12:14ff, Abraham lied about his wife to save his head, we cannot use it and teach men to use their wives as safety bargains when the chips are down.

Sarah gave her maid to Abraham for childbirth, it is in the Bible, but it’s neither an exhortation nor injunction for women to be generous with their maids to their husbands even in the face of childlessness.

It’s in the Bible that Elijah slaughtered hundreds of the prophets of Baal, that doesn’t mean Christians should slaughter unbelievers and worshippers of idols or other deities.

On polygamy, there’s no where the Bible mentions it as a doctrine. There are polygamous marriages in the Bible, that doesn’t mean the Bible sets it up as the ideal.

The language of Gen 2:24 is monogamy: “This is why a Man (singular) leaves his father and mother and is joined to his wife( singular) and the Two become one flesh” Our Lord Jesus Christ will repeat the same thing in Mtt 19.

Monogamy is taken as the ideal from the language of Gen 2:24: “that is why a man leaves his father and mother and is united with his wife, and they become one”. The language is singular and not plural.

Then Adam was given one wife by God. If polygamy were the ideal, God would have given Adam more than one wives, the ribs to make more women were not lacking.

Practically, check children from polygamous homes and those from monogamous homes. It’s even more difficult to practice polygamy in this fast paced and materialistic age than it was in the more agrarian periods. How much time would a man have to satisfy the emotional and intimacy needs of his wives and children?

The only argument advanced for polygamy so far is cure for men’s high libido or sexual preference. Doesn’t it sound selfish and unfair to the women and children especially?

Before David cheated with Bethsheba, he already had multiple wives na. Let’s not use men’s sexual indiscipline to canonise polygamy. While I will not criminalize polygamy, I wouldn’t push it as an answer to men’s sexual antics and fantasy. if men were taught to live monogamously ab initio, they would have been doing it better by now.

As it stands now, monogamy is the doctrine of the church. The church has the authority and power to teach doctrines that are revealed by sacred scripture and tradition. If we keep trying, we will get better. For now, it is one man one woman, no more no less.” 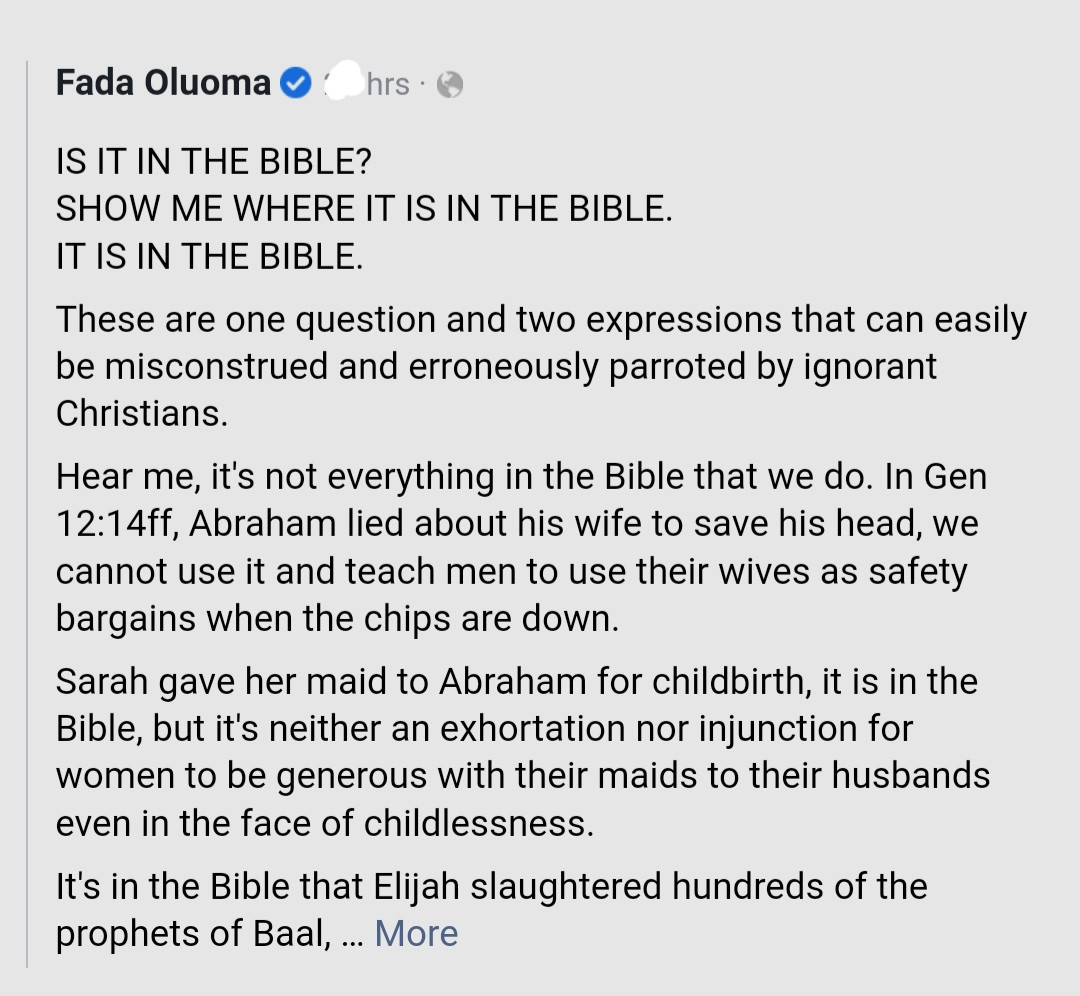