A Brazilian anaesthetist has been arrested after he was filmed raping a pregnant woman during a C-section.

One-legged Man Melts Hearts after Being Spotted Working as Bricklayer

Giovanni Quintella Bezerra, 32, was arrested on Monday on suspicion of rape after he was secretly filmed putting his penis in the woman’s mouth after he heavily sedated her at the Hospital da Mulher in São João de Meriti, Rio de Janeiro.

Bezerra, only completed his medical training in anaesthesia two months ago, raised concerns after hospital staff became worried about the amount of drugs he was giving to his patients so fitted a secret camera to see what he was up to before a C-section surgery on a woman due for delivery. 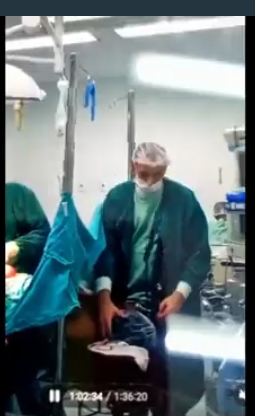 What they found on the video footage horrified them. Bezerra was seen sexually assaulting the woman by putting his penis in her mouth as other doctors performing the C-section on her just a few metres away on the other side of the surgical curtain.

When he’s done, he wipes the patient’s mouth with a tissue to erase evidence of the crime. The alleged assault, which took place on Sunday, reportedly went on for ten minutes after Bezzera waited for the woman’s companion to leave the room with the newborn child.

A Brazilian anaesthetist was arrested after he was caught putting his penis in a pregnant woman's mouth during her C-section.

He heavily sedated her and hospital nurses set up a hidden camera after being worried over the higher doses of anesthesia he administered to patients pic.twitter.com/wtjMivizzr