The UK Meteor Network received over 200 reports of the “fireball” being spotted in the night sky at approximately 9pm on Wednesday September 14.

Videos shared online showed a large bright object flying from left to right in a downwards angle followed by a long tail.

It was gathered that people spotted the ball of light in the skies above parts of Scotland, northern England and Northern Ireland.

Many UK residents also reported hearing a loud bang as the object entered the Earth’s atmosphere and shot past the sound barrier. 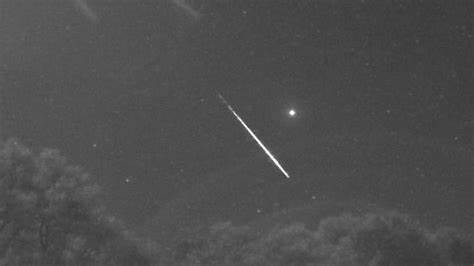 Alan McGowan, of Dunblane, Stirlingshire, said: ‘I saw it arc slowly across the night sky as I drove through Dunblane with my dad around 10pm. It was a huge burning ball of green with an orange flaming tail. It was amazing to see. At first we thought it was a crashing plane or helicopter then realised it was likely a meteor.’

Danny Nell, 21, witnessed the meteorite when out walking his dog in Johnstone, west of Paisley and Glasgow.

“I was walking my dog and it was strangely enough 10pm on the dot, and I just saw the flash in the sky and pulled out my phone and recorded it.

“I thought it may be a firework at first because there was a lot of Scottish football on but quickly realised it wasn’t and just grabbed my phone to see if I could catch it.”

Some witnesses claimed that the object crashed north of Glasgow although there has been no proof of an impact.

Hours after announcing that it is “investigating to ascertain what the object was – a meteor or space debris”, the UK Meteor Network have now announced that the object, which was seen burning through the atmosphere for about 20 seconds, was “definitely a meteor”.

The UK Meteor Network Network said the object came to a stop between 50km and 100km (31-62 miles) west of Islay.

“It came on an asteroidal orbit and entered the atmosphere at 14.2 km/s,” the network tweeted. “The observed portion of the trajectory covered over 300km. If any meteorites did fall, they ended up in the ocean.”

The expert group said it is “now 100% confident this was a small part of an asteroid”.

Some scientists have also used video footage captured by the public to work out whether the object was a meteor or space junk, and where it came from.

Here are some videos captured by social media users below…..

Did I legit just see a shooting star in Motherwell or is that something crashing out the sky? pic.twitter.com/DBQh8zXjnT