Lebanon has been dealing with a financial crisis that has limited bank withdrawals for three years. The World Bank says the financial crisis in Lebanon is one of the worst in the world since the mid-19th century. On Wednesday, two banks were robbed in Lebanon by customers who wanted access to their own money. In the first case, a woman and a few associates entered BLOM Bank in the capital city of Beirut brandishing a gun. She left with $13,000 of money from her account, according to a depositors’ advocacy group (via Reuters).

A short time later, also on Wednesday, a man in the mountain city of Aley entered a Bankmed branch armed with a gun and demanded some of the money trapped in his savings account.

Last month, a different man held up a bank in Beirut to access his funds to pay for treatments for his sick father. That man took six hostages until he was able to access roughly $30,000 of the $200,000 locked in his account.

The woman who held up the BLOM Bank, Sali Hafiz, spoke to Al Jadeed TV before going into hiding. She says that she had gone into the bank a few days earlier, asking for access to her funds but was denied, adding that she needed the funds to pay for her sister’s cancer treatment. She says she even considered selling her kidney to pay for it, before deciding to demand her money back from the bank.

“I have nothing more to lose, I got to the end of the road,” Hafiz told Al Jadeed TV, adding that the gun she used to hold up the bank was not real. 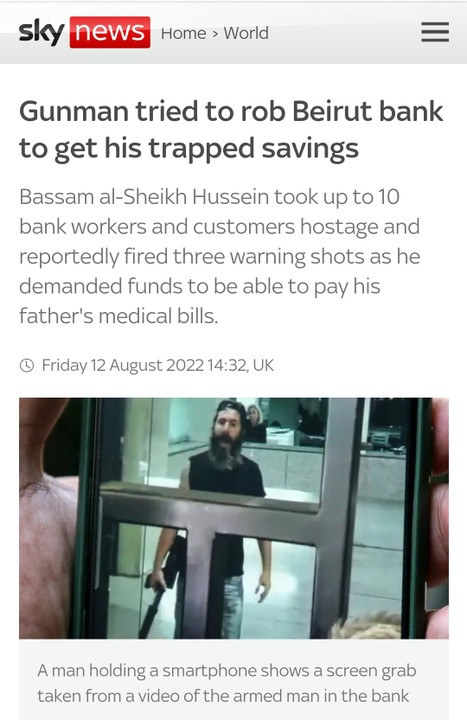 A BLOM Bank spokesman told Reuters that Hafiz entered the bank with her associates and threatened to set people on fire if she did not receive the money.

Sali Hafiz’s mother, Hiam Hafiz, spoke to a local TV station about her daughter’s actions. “All we have is this money in the bank. My daughter was forced to take this money – it’s her right, it’s in her account – to treat her sister.”

Banks in Lebanon claim that they allow customers to withdraw their funds for humanitarian cases, but depositors say that the banks rarely approve withdrawals even in cases of emergencies.

Less is known about the man who demanded his money from the Bankmed branch in Aley, and Bankmed has declined to comment thus far.