On February 18 this year, an alarm was raised at a correctional centre in Adamawa State. A former Boko Haram fighter, Wilberforce Yohanna, had just been recruited as a staffer of the Yola New Custodial Centre in the state.

Leaked internal documents on the security situation at the prison facility showed that Mr Yohanna’s Boko Haram background was detected following the dexterity he displayed with gun handling during training.

“No Food, No Election” – Kenyan Citizens Take to the Streets to Protest Over High Cost of Living (Photos)

“While on training, he was found to be more versatile in the use and operations of firearms,” the leaked files obtained by PREMIUM TIMES, revealed. “Upon further interrogation and collaborative findings, he confessed to having been abducted and held hostage by members of the Boko Haram for two (2) years.”

The new prison official also confessed to having gotten training in heavy weapon handling from a Boko Haram base before he escaped their custody, according to the documents.

It is unclear if Mr Yohanna’s claim that he fought for Boko Haram against his will is true or if he merely tried to downplay his past. Authorities have so far failed to launch the needed inquiry needed to scrutinise the prison official’s claim and determine his real past.

What is however clear is that Mr Yohanna was a deadly combatant for the terrorist Boko Haram group and the implications of recruiting him into any of the nation’s security services should have been extensively considered.

Although the Correctional Service authorities are worried about the recruitment of an ex-terrorist, they are unwilling – or uncertain – about doing anything in Mr Yohanna’s case to avoid getting negative media attention, insiders familiar with the matter said.

Asked if the ex-terrorist was profiled before he was recruited, our inside sources said bribery and corruption have compromised the standard of vetting in the correctional service.

The insiders said a good number of applicants pay bribes to get placements at the correctional service without going through any rigorous vetting.

“Usually vetting is to be done before recruitment but in the Correctional Service, little or no vetting is done,” a top prison official, who asked not to be named because he is not permitted to divulge such information, told PREMIUM TIMES. “People pay for jobs and receive their employment letters at home. Level 8 is sold for 800k, Level 4-7 for 400k.” 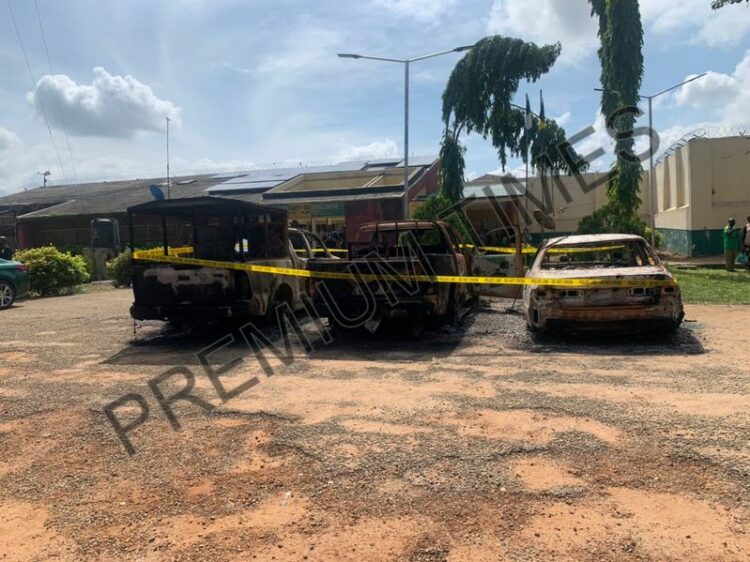 The Boko Haram ex-combatant and the fear in the atmosphere

When authorities found that Mr Yohanna was a former member of the violent Boko Haram group with rare expertise in gun handling, palpable fear and anxiety immediately enveloped the prison facility, insiders said.

Officials, who spoke with PREMIUM TIMES but asked not to be identified by name, said poor recruitment exercises allowed Mr Yohanna to enter the workforce of the correctional service, make prison facilities vulnerable to attacks and jailbreaks.

This, the officials said, is because “evil planners can easily find compromised, corrupt, or double-dealing correctional service workers to help “their mission from within.”

The following day, the Islamic State for West African Province (ISWAP), a Boko Haram factional group, claimed to be the mastermind of the jailbreak, after releasing a recorded video of how the prison facility came under attack.

It was the latest occurrence in a spate of jailbreaks that have left President Muhammadu Buhari ‘disappointed’ in Nigeria’s security intelligence.

Over 7,000 inmates have escaped since the jailbreak epidemic struck Nigeria’s overcrowded prison facilities, according to the escapee data provided by the correctional service officials. Many of such attacks were said to be masterminded by different terror groups, including the Boko Haram sect.

In November 2021, for example, armed men suspected to be Boko Haram terrorists invaded the Jos Correctional Centre, powering firearms at the facility and freeing more than 250 inmates. Meanwhile, PREMIUM TIMES has seen classified documents revealing that the mastermind of that attack has been recaptured in Lafia, the capital of Nasarawa State.

President Buhari visits Kuje Prison after attack on the facility.

“His name is IBRAHIM LAWAL (ATM) No M760 but with a false name in Lafia as Mohammed Ibrah,” the leaked documents stated. “Efforts are made from Jos Custodial Centre to go to Lafia for his return.”

In 2020, Ibrahim Gaidam, a senator in Nigeria’s National Assembly introduced the legislation to form the National Agency for Deradicalisation, Rehabilitation, and Reintegration of Repentant Insurgents.

The bill has been successful. But Boko Haram defectors or so-called repentant terrorists can only be reintegrated into society after going through the deradicalisation processes of attending classes on non-violent interpretations of Islam, vocational training, psychological therapy, and trauma counseling. It is unclear if Mr Yohanna was ever deradicalised before he found his way into the prison service.

In Borno, a Nigerian North-east state, where Boko Haram was birthed in the early 2000s, victimised citizens say they can’t afford to live with former members of a sect that killed their families and relatives.

Also known as the Jama’tu Ahlis Sunna Lidda’awati wal-Jihad, an Arabic label for “the people committed to the propagation of the prophet’s teachings and jihad”, the Islamist sect has caused an estimated 20,000 to 30,000 deaths and displaced over 2.3 million, according to public data seen and analysed by PREMIUM TIMES.

Last year, hundreds of these ex-militants surrendered their arms to the Nigerian army after fleeing bushes due to the fear of epidemic diseases and hunger in their hideouts, according to local media reports and researchers. The terrorists would later be paraded by the army as they sought forgiveness from Nigerians.

In some of the photos shared by Onyema Nwachukwu, the army’s spokesman, on social media, the former insurgents were seen holding placards some of which read “please forgive us Nigerians”.

Although it is not clear if the former radical terrorist — now a prison official — had been deradicalised before he was offered a job at the correctional facility, the fear of his new colleagues is that he could compromise the security of the custodial centre being an ex-loyalist of Boko Haram.

Meanwhile, the spokesperson of the Nigerian Correctional Service (NCoS), Abubakar Umar, said claiming that a former Boko Haram fighter was recruited might be a plot to ‘escalate’ the recent Kuje jailbreak.

He compared the story with the claim that Abba Kyari, the suspended Nigerian supercop detained at the maximum prison facility, was among the escapees. The story would later be found to be untrue.

“To say that a former Boko Haram member is recruited in any of our facilities is not true,” Mr Umar told PREMIUM TIMES in a telephone interview. “The service is not aware of such a case.”

But our reporting for this yielded leaked official documents debunking Mr Umar’s claim with details of Mr Yohanna’s Boko Haram background case. Then, sources said Mr Yohanna’s case has been a matter of discussion within the correctional service since he was recruited in February.

Mr Umar argued that applicants go through a rigorous process before their employment in the service but insiders insist that the recruitment system had been compromised.

“Before recruitment, you go through a process which includes presentation of your papers to ensure that you are the owner of the claimed result,” the spokesman said. “After that, you go through screening. It is only after the screening that they find you qualified both physically and based on the interview they do, checking your character, then they’ll now recruit you.”

Is it safe to employ an ex-Boko Haram in a prison facility?

The suspicion of many Nigerians on social media after the recent Kuje prison attack claimed by ISWAP, a Boko Haram splinter group, is that the jailbreak could not have been successful without the help of an insider. This raises the brows of critics and security analysts who wonder if it is safe to employ a former terrorist as a prison official.

In 2021, Babagana Zulum, the Governor of Borno, warned that the deradicalisation of repentant Boko Haram was not working. While speaking at the North-east Governors’ Forum meeting in Bauchi, Mr Zulum said the initiative needed to be reviewed because some of the ex-Boko Haram fighters only come to spy on communities and then return to join the group.

Security experts contacted by PREMIUM TIMES shared the same view with the Borno Governor. An expert, Azeez Olaniyan, said “no notorious terrorist can be completely deradicalised.”

“These people operate on the basis of ideology and indoctrination so they’re never completely reformed,” said Mr Olaniyan. “There are tendencies that they may still be loyal to their group. And that is why it is dangerous to completely trust them to the extent of employing them in a correctional facility or any security service.”